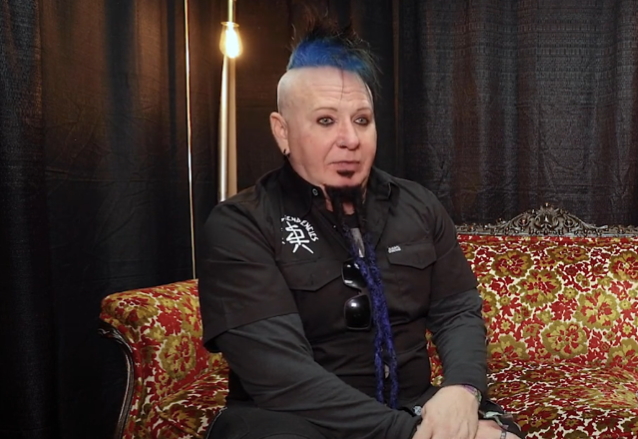 MUDVAYNE's CHAD GRAY Says He Had COVID-19 During Band's First Reunion Show: 'I Didn't Know I Had It' At The Time

MUDVAYNE singer Chad Gray has revealed that he had COVID-19 on stage while performing with his bandmates at their first show in 12 years, which took place last September at the Inkcarceration Music & Tattoo Festival in Mansfield, Ohio.

Speaking to Danny Wimmer Presents at the Welcome To Rockville festival in Daytona Beach, Florida this past November, Gray said that he never lost his senses of taste and smell while battling the disease caused by the SARS-CoV-2 coronavirus.

"I had it on stage… The good thing is I didn't know I had it at [Inkcarceration]. [So] I wasn't stressing about it but I couldn't figure out what the fuck was going on with my body. That day, [I was] super short of breath. My voice didn't seem to wanna work when I warmed up. My throat was fucking super dry all day. I had some sinus shit going on that I didn't know."

Elaborating on how he eventually recovered from COVID-19, Gray said: "[My wife] went to [the supermarket chain] Sprouts, and apparently they have a fucking cornucopia of fucking feel-better stuff, shit for your immunity. So she went and cleaned them out of that shit. I was probably taking 30 pills a day — vitamins, all the vitamins, but probably 30 something or other in pill form."

MUDVAYNE canceled its appearance the Louder Than Life festival in Louisville, Kentucky last September after Gray and "a few staff members" tested positive for COVID-19.

Gray has spent the past 16 years fronting HELLYEAH, which released its sixth studio album, "Welcome Home", in September 2019 via Eleven Seven Music. The disc marked the group's final effort with drummer Vinnie Paul Abbott, who passed away nearly four years ago.