"Murder In The Front Row: The San Francisco Bay Area Thrash Metal Story" has received praise from Rolling Stone and Billboard to San Francisco Chronicle and The Playlist. After premieres in San Francisco and London, the lauded documentary is headed on the road, with screenings at Alamo Drafthouse Cinemas across the country in August and September.

Directed by Adam Dubin (BEASTIE BOYS' "Fight For Your Right to Party" and "No Sleep 'Til Brooklyn"),the film contains over 50 interviews with various metal stalwarts — including METALLICA, MEGADETH, SLAYER, ANTHRAX, EXODUS, TESTAMENT and DEATH ANGEL — telling its tall tales through a mix of first-person interviews, animation and narration by comedian Brian Posehn.

Select screenings will be followed by a question-and-answer session with Dubin, with tickets for some on sale now.

In addition to Alamo Drafthouse, "Murder In The Front Row" is also showing at independent theaters and international film festivals. A full list of confirmed screenings can be found below.

Narratively, "Murder In The Front Row" follows the story of a group of young kids in Northern California with a shared passion for heavy rock bands like UFO, IRON MAIDEN and MOTÖRHEAD. "These are just good stories, and they are very human stories," says Dubin. "All these bands were mainly from England, and they never really toured the West Coast, so these young people started creating their own music, starting their own fanzines, booking clubs and trading tapes. These were people who were adamant about music and the bands, but also each other."

The documentary is loosely based on a 2012 photojournal of the same name by Harald Oimoen and Brian Lew.

"What I loved about the book is that it wasn’t just about METALLICA," continues Adam. "It was documenting a vibrant scene, where all the bands were equal and there was real camaraderie. The photos captured the sweat of the clubs, the ringing in your ears and the power of young people. Harald and Brian captured the humanity of it, and they understood that I was somebody who could bring that out in a film."

"Murder In The Front Row" screenings: 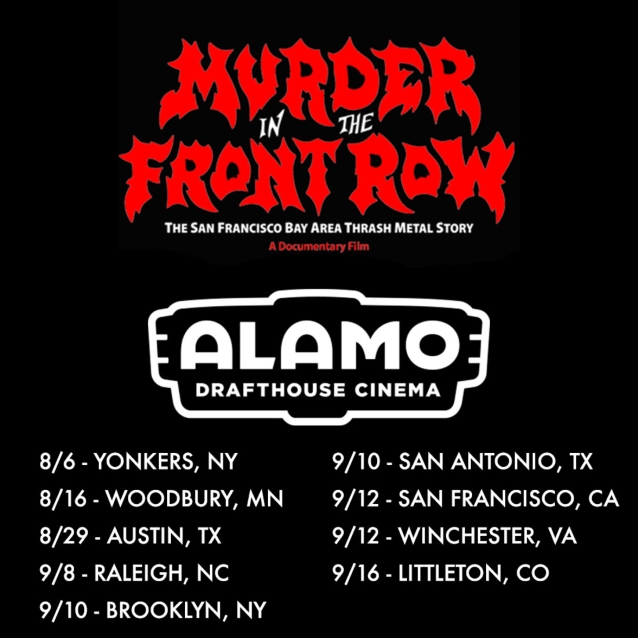