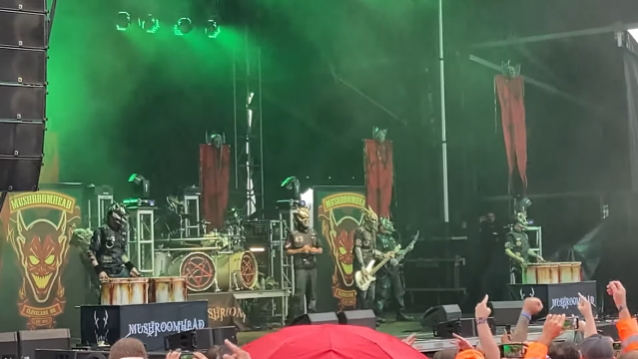 Guitarist Dave "Gravy" Felton rejoined MUSHROOMHEAD on stage last night (Saturday, September 10) at this year's Blue Ridge Rock Festival at the Virginia International Raceway in Alton, Virginia. Fan-filmed video of his appearance can be seen below.

Earlier today, MUSHROOMHEAD shared a photo of Dave on stage with MUSHROOMHEAD at Blue Ridge, and included the following message: "Who saw Gravy's return to the MUSHROOMHEAD stage last night at the @blueridgerockfest? #mushroomhead #heygravy #woahskinny".

When one fan asked in the comments below the post if Gravy is "replacing the latest guitarist," MUSHROOMHEAD responded: "No sir! We had 2 guitarists on stage last night."

Dave, the brother of MUSHROOMHEAD founder and drummer/percussionist Steve "Skinny" Felton, was kicked out of the band in 2012. Four years later, Dave told Rock Music Star about his exit from the group: "The [MUSHROOMHEAD] thing is very strange. If you shine too much, it takes away from other people. I think there's insecurity issues there or something. Who knows? You would think he would want to exploit all of the strengths in the band and not the weaknesses, and that's kind of what it seems like they like to do."

Dave went on to call MUSHROOMHEAD "a dictatorship". He explained: "MUSHROOMHEAD isn't a band. There's one person calling all of the shots, and if you start questioning things, or trying to make your mark in a certain way or whatever, it's kind of frowned upon by the guy in charge. So the more you push or the better musician you are — who knows? — maybe you're considered a threat; I don't know. I was kicked out. I didn't do anything wrong except question things."

He added: "I never had a say in anything. I wasn't an original guy. Me and my brother and Jeff were in a band before MUSHROOMHEAD called HATRIX, and that got blown off. They started [MUSHROOMHEAD], and [MUSHROOMHEAD] took off. I was asked to join later, as a hired guy… I'm not an original guy. Actually, it was probably '99-2000 when I got in as a hired guy. And then, they got the deal with Eclipse, and did the first tour opening for W.A.S.P. They couldn't afford to pay me my hired show rate, so they asked me to join the band. So, it was like feast or famine with the band. Now you're a member. But, of course, after I'm out, it's, like, 'Oh, he was just a hired gun.' So, yeah. I'm in the band when it benefits you, but when you want me out because I'm calling you on your bullshit, then I'm a hired gun. Okay, whatever."

A little over two months ago, Skinny said that MUSHROOMHEAD was "stronger than ever" after undergoing its latest round of lineup changes.

Skinny addressed the recent personnel shuffles in an interview with Germany's Moshpit Passion. He said: "This is just the current version that we're touring with. COVID came in and changed a lot of people's lives, and some people decided that they didn't wanna do the touring anymore. And we weren't gonna just sit around and wait for people to feel that the world was convenient enough for them.

"We've been trying to put this tour together since we put [the 'A Wonderful Life'] record out — June of 2020," he explained. "So we've been trying to do this for two years. So if people kind of fell off over the course of two years, then that's what happened. So we ended up rebranding the band once again. And it's stronger than ever. And we changed up quite a bit of the material [in the setlist] because of that. We've got abilities now that we simply did not have in the past, as far as touring. So we're totally taking advantage of it."

Vocalist Steve Rauckhorst, who made his recording debut with MUSHROOMHEAD on "A Wonderful Life", stated about how he ended up joining the band: "The funny story about that is the first time I ever came to Europe was with MUSHROOMHEAD. I just wasn't on stage; I was part of the crew. And I have been around the band, one way or another, or at least have heard about it since basically the very beginning. I saw 'em when I was very young.

"It's been really good," he said about his experience singing for MUSHROOMHEAD. "It's felt more like home. It was a really comfortable transition. It went about as well as it possibly could. And it's just kind of a continuance or something, it felt like to me, more than a new beginning or a blatant shift in direction or anything.

MUSHROOMHEAD's eighth album, "A Wonderful Life", was released via Napalm Records. The follow-up to 2014's "The Righteous & The Butterfly" was produced by Skinny and was mixed by Matt Wallace (FAITH NO MORE, 3 DOORS DOWN),also recognized for his work on the band's classic offering "XIII".

LaPonza previously appeared on "The Righteous & The Butterfly" track "We Are The Truth", as well as the 2015 song "Among The Crows", which appeared on the "Game Of Thrones"-inspired HBO promotional album "Catch The Throne".

In a 2020 interview with The Chronicle, Felton said about Jackie's contributions to MUSHROOMHEAD: "We had female vocalists in the past, so it was a very natural progression to add her into the mix. Before she agreed to do 'The Heresy', I could just totally hear her voice all over it. The natural progression of MUSHROOMHEAD has always been to expect the unexpected.

"One thing people overlook is there's never been the same lineup on any two consecutive records ever in the history of MUSHROOMHEAD. It's kind of cool — every album is definitely a new chapter but in the same book."

Who saw Gravy's return to the Mushroomhead stage last night at the @blueridgerockfest? 🤯 #mushroomhead #heygravy #woahskinny