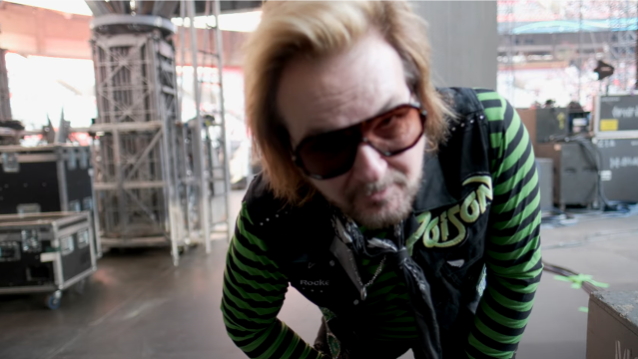 Rikki Rockett says that POISON's "The Stadium Tour" "proved that rock 'n' roll is not dead."

The long-delayed North American trek with DEF LEPPARD, MÖTLEY CRÜE and JOAN JETT & THE BLACKHEARTS was originally planned for 2020 and later moved to 2021 and then to 2022. "The Stadium Tour" concluded this past Friday (September 9) in Las Vegas, Nevada.

On Saturday, Rikki took to his social media to write: "Such a crazy summer! I think we proved that Rock 'N' Roll is not dead. Neither is our brand of Rock 'N' Roll! We still have our pundits and quite frankly, it's part of our success.

"Back in the day, Jazz peeps criticized Rock 'N' Roll for having players who weren't proficient all the while having zero idea what makes good Rock 'N' Roll," the drummer continued. "POISON isn't a jazz rock fusion/progressive metal band. Hell, most of the time we aren't even really metal, we are Rock 'N' Roll. To those folks, enjoy stuffing 32nd notes into a 150 Bpm song or whatever floats your boat. Rock 'N' Roll moves the soul and if you all hate us for it, then that is cool!

"We moved souls this summer. I know it. I saw it in the fans eyes. Not the critics. I could not not give two shits about you critics. Baste in your sour cream sauce of hate.

"I love you all! Till next time, remember: Seeing is believing, but feeling is the truth!"

Last month, Bret Michaels revealed that POISON fans may have to wait until 2025 to see the band perform again after "The Stadium Tour". Asked by SiriusXM's "Trunk Nation With Eddie Trunk" host Eddie Trunk to elaborate on his touring plans for the foreseeable future, the singer said: "For me, next year, I put it off this year, because we didn't know this year… With everything going on in the world, we didn't know if 'The Stadium Tour' was gonna go [ahead in 2022]. I prayed every day — I'm, like, 'I hope this goes. I've been waiting since '20.' First words out of my mouth besides thanking the fans and the bands and the crew, I go, 'I've been waiting two, almost three years for this' [since] we announced 'The Stadium Tour'. But for me, this year we were gonna do the 'Party Gras' tour. I put together something incredible, and now we're gonna launch that in '23. And when I tell you what this is and the way we've designed it with everybody, it's an incredible amphitheater tour that's just gonna be — I think it's gonna be insane and gonna be the 'all thriller, no filler' summer party. And you'll know what I mean when it hits the stage. It's really an exciting idea."

Asked if the "Party Gras" tour would include his own band or POISON, Bret said: "This would be my own band, in '23. I'm just saying '25 is probably when POISON will put a humongous world tour together and go back out and be incredible. And it'll be awesome. My 'Party Gras', this entire amphitheater thing we're doing and festival, as soon as we knew we were doing 'The Stadium Tour', we moved that to '23 and we got to do 'The Stadium Tour', which is incredible."

In a 2017 interview, Rockett acknowledged that part of the reason POISON hasn't been motivated to work on new music has been the fact that fans rarely show interest in hearing fresh material performed live when classic rock groups go on tour. "We could write the second coming of 'Talk Dirty To Me', and I don't know if people wanna hear it or not, and that's a frustrating thing; it really is," he said. "AEROSMITH was able to do it, but not everybody is. I mean, even THE ROLLING STONES have had problems with that in the last few years. So… I don't know. But I do think it's important to stay viable. For the 'über fans,' it's always a really, really good thing. And that's what you do it for — you do it for you, you do it for the real fans, the real true fans."

Such a crazy summer! I think we proved that Rock 'N' Roll is not dead. Neither is our brand of Rock 'N' Roll! We still...