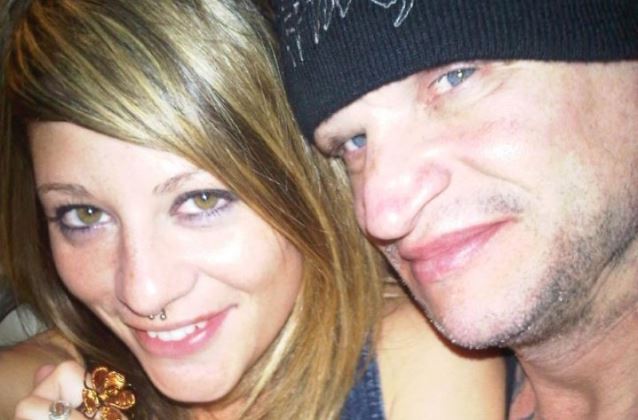 Stacy Hatrix, the wife of MUSHROOMHEAD singer Jeffrey Nothing, also known as Jeff Hatrix (born Jeffrey Lewis Hetrick),has been diagnosed with stage 3 colon cancer. She started chemotherapy today and a GoFundMe.com campaign has been launched to help defray her medical costs.

A message on the site reads as follows: "While this diagnosis is devastating for anyone who receives it, for Stacy it's even more so. She is young and newly married to Jeff Hatrix.

"The band has an extensive touring schedule across the United States lined up for 2015. This is Jeff's source of income to support his family.

"Stacy is only 29 years old and starts chemotherapy today. Her husband, Jeff, will have to stop touring several times to help care and support her. He will also have significant lost wages.

"Stacy was in the process of working a full-time job and obtaining her master's degree in wildlife biology. Now she will need to halt her work and studies, causing additional financial concerns.

"This is an overwhelming financial burden that has suddenly happened.

"Stacy won't be able to go back to work for a long time and will have up to a year or more of lost wages. In addition, she will have many bills, co-pays, and special foods that she must purchase. These are items that won't be covered by medical insurance, including considerable travel expenses. These costs will be extensive for her and her family."

In a May 2014 interview with Hellhound Music, Jeffrey was asked what the biggest misconception of MUSHROOMHEAD has been over the past 25 years. He responded: "That we are SLIPKNOT wannabes. We predate them and another one is that there is ill will between the bands. Our problem is with the label. We sent them everything we ever made during negotiations with Roadrunner Records [in the late 1990s]. We said no to a very bad deal. [SLIPKNOT] said yes, and the rest is history. Hindsight being 20/20, maybe we should have took the deal. [SLIPKNOT] got a huge push. In the end, I'm pretty happy with where we are sitting today."

MUSHROOMHEAD's eighth studio album, "The Righteous & The Butterfly", sold around 11,000 copies in the United States in its first week of release to debut at position No. 20 on The Billboard 200 chart. The CD was released on May 13, 2014 via Megaforce Records.