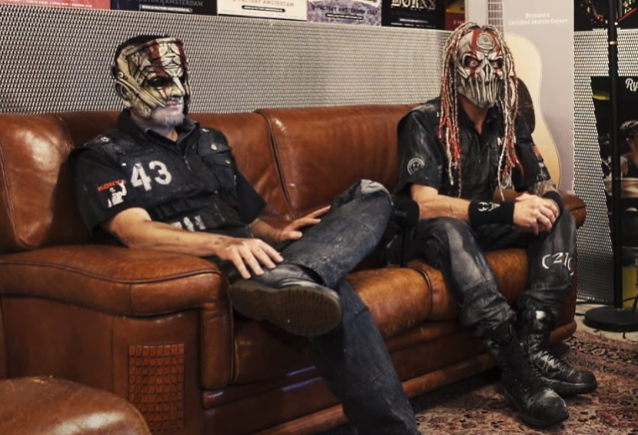 MUSHROOMHEAD mastermind and drummer/percussionist Steve "Skinny" Felton says that the band is 'stronger than ever" after undergoing its latest round of lineup changes.

Vocalist Jason "J Mann" Popson and samplist Rick "St1tch" Thomas are both sitting out MUSHROOMHEAD's current tour, with VENTANA's Scott Beck covering the former's parts live and Aydin Michael filling in for St1tch. Elsewhere, vocalist Jackie LaPonza and guitarist Tom "Tankx" Shaffner have both exited the band, with Joe "Jenkins" Gaal stepping in for the latter.

Skinny addressed the most recent personnel shuffles in a new interview with Germany's Moshpit Passion. He said (as transcribed by BLABBERMOUTH.NET): "This is just the current version that we're touring with. COVID came in and changed a lot of people's lives, and some people decided that they didn't wanna do the touring anymore. And we weren't gonna just sit around and wait for people to feel that the world was convenient enough for them.

"We've been trying to put this tour together since we put [the 'A Wonderful Life'] record out — June of 2020," he explained. "So we've been trying to do this for two years. So if people kind of fell off over the course of two years, then that's what happened. So we ended up rebranding the band once again. And it's stronger than ever. And we changed up quite a bit of the material [in the setlist] because of that. We've got abilities now that we simply did not have in the past, as far as touring. So we're totally taking advantage of it."

Vocalist Steve Rauckhorst, who made his recording debut with MUSHROOMHEAD on "A Wonderful Life", stated about how he ended up joining the band: "The funny story about that is the first time I ever came to Europe was with MUSHROOMHEAD. I just wasn't on stage; I was part of the crew. And I have been around the band, one way or another, or at least have heard about it since basically the very beginning. I saw 'em when I was very young.

"It's been really good," he said about his experience singing for MUSHROOMHEAD. "It's felt more like home. It was a really comfortable transition. It went about as well as it possibly could. And it's just kind of a continuance or something, it felt like to me, more than a new beginning or a blatant shift in direction or anything.

MUSHROOMHEAD's eighth album, "A Wonderful Life", was released via Napalm Records. The follow-up to 2014's "The Righteous & The Butterfly" was produced by Felton and was mixed by Matt Wallace (FAITH NO MORE, 3 DOORS DOWN),also recognized for his work on the band's classic offering "XIII".

LaPonza previously appeared on "The Righteous & The Butterfly" track "We Are The Truth", as well as the 2015 song "Among The Crows", which appeared on the "Game Of Thrones"-inspired HBO promotional album "Catch The Throne".

In a 2020 interview with The Chronicle, Felton said about Jackie's contributions to MUSHROOMHEAD: "We had female vocalists in the past, so it was a very natural progression to add her into the mix. Before she agreed to do 'The Heresy', I could just totally hear her voice all over it. The natural progression of MUSHROOMHEAD has always been to expect the unexpected.

"One thing people overlook is there's never been the same lineup on any two consecutive records ever in the history of MUSHROOMHEAD. It's kind of cool — every album is definitely a new chapter but in the same book."