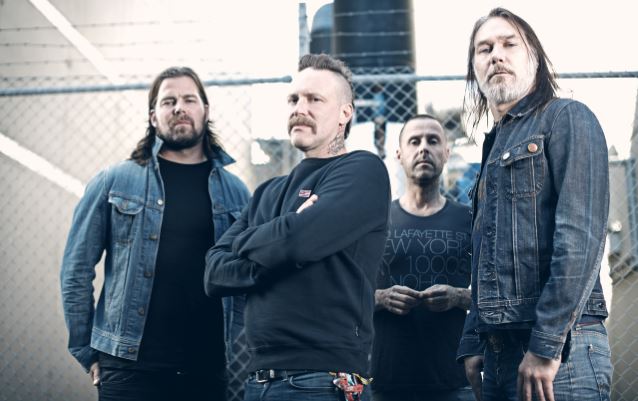 "Yara's Song", the new video from Swedish hard rockers MUSTASCH, can be seen below. The clip was directed by Patric Ullaeus of Revolver Film Company, who has previously worked with DIMMU BORGIR, LACUNA COIL, IN FLAMES, SONIC SYNDICATE and KAMELOT, among others.

Said MUSTASCH about the inspiration for the "Yara's Song" video: "In 2013, eight-year-old Yara was sent from Gaza to Sweden by her parents to escape the trauma of war. She came to live with her uncle and his wife in Karlskrona.

"After many alerts from the society about bruises, Yara not wearing enough clothes in winter time and beeing left alone in their filthy apartment with her baby cousins and other alarming things… nothing was done. The authorities did nothing.

"After several months, an ambulance was sent to the apartment were Yara and her relatives lived, just to find Yara beaten to death.

"The story touched many people. Apart from anger and tears, this is our reaction."

"Yara's Song" is taken from MUSTASCH's new album, "Testosterone", which was released on September 18 via Gain Music Entertainment.

It´s time! Video release in memory of Yara, May she rest in peace. It will be released on Youtube/Vevo on Friday!Spotify; http://open.spotify.com/track/4bQvekoJxjdd7TxqL45djr