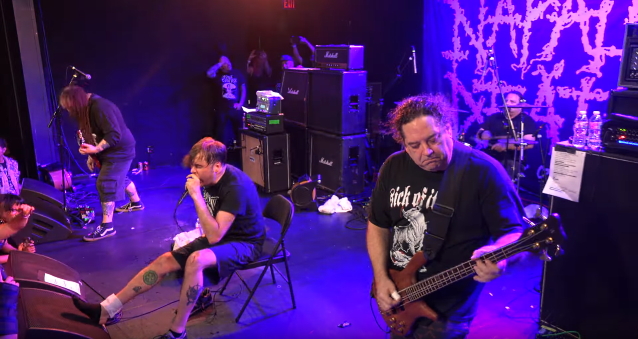 Church Of The 8th Day has uploaded video footage of NAPALM DEATH's entire October 23 and October 24 concerts at the Teragram Ballroom in Los Angeles, California. You can now watch it below.

NAPALM DEATH singer Mark "Barney" Greenway injured his right ankle earlier in the band's U.S. tour with SICK OF IT ALL and MUNICIPAL WASTE and was forced to play shows sitting down on a chair at the front of the stage. Furthermore, NAPALM's longtime bassist Shane Embury was unable to make the trek for reasons that haven't been disclosed. Filling in for him was Vernon Blake, a longtime friend and NAPALM DEATH roadie who has previously played guitar in the band ANARCHUS.

NAPALM DEATH's trek with MUNICIPAL WASTE, SICK OF IT ALL and TAKE OFFENSE kicked off on October 3 in Dallas, Texas.

NAPALM DEATH is continuing work on its long-awaited new album for a tentative early 2020 release. The follow-up to 2015's "Apex Predator - Easy Meat" will feature an appearance by guitarist Mitch Harris, who has been taking a leave of absence from NAPALM DEATH since late 2014 to focus on his family life.