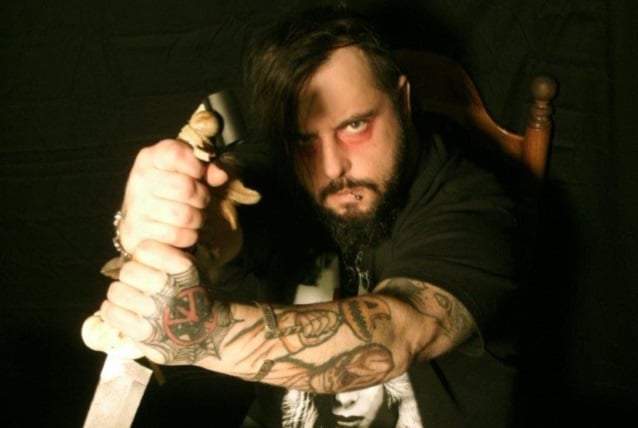 **Update**: According to an obituary in The Review, Frank "Killjoy" Pucci was 51 years old when he died suddenly on Sunday, March 18 in the emergency room at East Liverpool City Hospital. A previous version of this article erroneously listed his age as 48.

NECROPHAGIA frontman Killjoy passed away this morning (Sunday, March 18),the band has confirmed. The vocalist, whose real name was Frank Pucci, was 51 years old. No cause of death has yet been released.

Pucci's NECROPHAGIA bandmates announced his death in a Facebook post earlier today. Drummer Shawn Slusarek, guitarist Serge Streltsov and bassist Jake Arnette said in a joint statement: "We are so shocked and saddened to bring you the news of our dear brother Killjoy passing away this morning. We are at a loss for words. R.I.P brother you are forever in our hearts. We will cherish our moments together forever."

REPULSION's Scott Carlson mourned Pucci's passing, writing in a Facebook post: "Just heard the sad news that Killjoy of NECROPHAGIA has gone into The Beyond. He and I began trading our bands' demos way back in '85 or so. He was a real sweetheart and a true aficionado of underground horror and music."

Pucci formed NECROPHAGIA in 1983 and released the band's debut album, "Season Of The Dead", in 1987. Pucci was the sole remaining original member in NECROPHAGIA's most recent lineup, which issued its latest LP, "WhiteWorm Cathedral", in 2014.

"Philip is a great guy; he's like a brother to me. Unfortunately, due to extreme scheduling conflicts and previous commitments we will not be working together any longer," Pucci said in a 2002 interview.

Pucci first met Philip in 1990, bonding over their "mutual passion for true horror. He resurrected NECROPHAGIA in 1997 by writing some truly dark, horrific music that persuaded me to start doing music and NECROPHAGIA again," Frank explained.

Killjoy and Anselmo also wrote and recorded together as members of Philip's VIKING CROWN project, which released two full-length albums and an EP in the late '90s and early 2000s.

We are so shocked and saddened to bring you the news of our dear brother Killjoy passing away this morning. We are at a...

Just heard the sad news that Killjoy of Necrophagia has gone into The Beyond. He and I began trading our band’s demos...