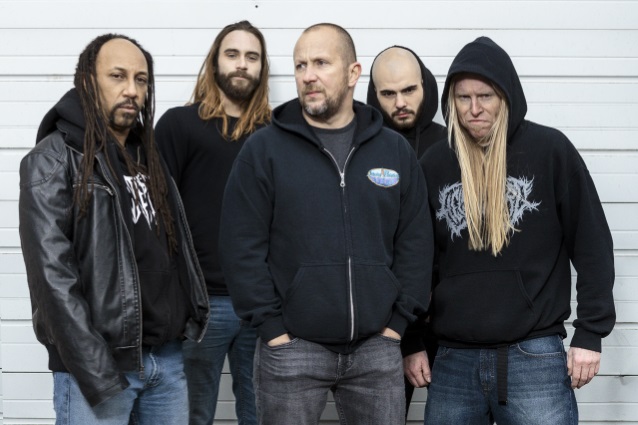 Terrance Hobbs has confirmed that SUFFOCATION is planning on embarking on one final tour featuring the band's original singer Frank Mullen.

Mullen has fronted SUFFOCATION from its inception in 1988 to the group's breakup in 1998, and then from 2002 onward. Due to his job commitments, he hasn't been able to consistently with the veteran death metal act for the past several years, but he has always been considered an official member of SUFFOCATION and has performed on all of the band's albums.

A few days ago, Mullen announced that he would be exiting the group completely this year after one more tour, although he offered no further details.

In a brand new interview with Metal Underground, Hobbs was asked if it's true that Mullen will no longer be touring or recording with SUFFOCATION after 2018.

"I believe that Frank is planning on completely stopping," the guitarist responded (see video below). "He does wanna do, like, a farewell tour, but it's so hard for him, as well as for us, because there's so much of the world, he can't just take off three months and do South America, do Australia, do Europe, do America, do Japan, go to all these different countries. So right now we're working really hard on — especially between management and Frank — trying to find out what would be the best areas that he'll be able to do in the short amount of time that he has to do a farewell tour. So, eventually it's gonna come, and hopefully it never will. Because we all love Frank — he's one of my best friends in the world, he's always a part of the business of SUFFOCATION as we made this together, and after 30 years… It's not like somebody, oh, he just joined the band and he didn't do a show, so now you kick him out and that's it. No. Frank's been there for 30 years. Now he's my business partner, and it's a more adult relatsionhip. As I said, as time goes on, there's a lot more responsibility for him, and, I guess, all the rest of us who are just musicians, we can go and play in a band all the time and play guitar or go and play in a band and play drums. Frank is screaming his lungs out, and at the end of the day, he's getting his bad headaches and things like that, which, in turn, is making it harder for him to do the kind of touring that a band like us, a death metal band, needs to do in order to get out to the rest of the world and have people take a listen."

He continued: "So, yeah, we're working on a farewell tour for Frank, and it'll be sad if he decides to go, but hopefully he won't. And that's still up in the air to me. But I'm always never gonna let him wanna go. 'No, Frank, you're gonna do this now.' 'No, dude, you're crazy. I can't sit on an airplane for 14 hours anymore.' I'm, like, 'Yeah, you can. But, yeah, Frank's onboard, he's a good dude, and I wish him the best in everything he's doing right now, I wish him the best for his family and his job. And hopefully we can get him back out here to come to say goodbye to you guys, if that's really what he wants to do."

Asked how fans have responded to SUFFOCATION's current stand-in vocalist, Ricky Myers of DISGORGE, Terrance said: "Well, the fans have always actually embraced Ricky. Ricky had his own band, DISGORGE, and still has it — he was a founding member of it. I think a lot of people recognize that 'cause of the extreme brutality of things he does. Now, Ricky is actually singing, but Ricky is a drummer, so, for us, it's almost like a bonus, because Ricky can turn around and he can play drums and have an input. His timing is great, and all the rest of that, and also, he's got a pretty evil voice. So we're really stoked about him, and I think the fans embrace him a lot. From the Netherlands Deathfest, which we just played before this tour started, the fans have really, really [taken] him in, so I think that that's a great thing for us, and I think it's a good thing for him as well."

SUFFOCATION is continuing to tour in support of its latest album, "...Of The Dark Light", which was released last June via Nuclear Blast Records.