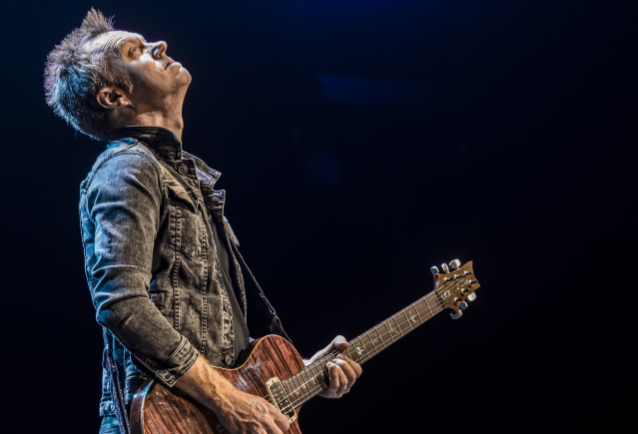 New DEEP PURPLE Guitarist SIMON MCBRIDE: 'I've Joined One Of The Most Iconic Rock Bands In The Field'

In a new interview with Andrew Daly of Vinyl Writer Music, Irish guitarist Simon McBride, who recently joined DEEP PURPLE as the permanent replacement for Steve Morse, was asked what sort of emotions he was experiencing when he was asked to become a member of the group. He responded: "It's been an amazing year, and honestly, it's been life-changing. If somebody had mentioned to me last year and said, 'Simon, you will be the new guitar player for DEEP PURPLE,' I would have laughed in their face and said, 'Yeah, that's never gonna happen.' [Laughs]. But here we are. And now we've just started our third tour together, and it's all been going fantastic. The guys are brilliant, everybody's very happy, and everything is going great, which is a good thing. But nobody is happier than me, though, because it's DEEP PURPLE. I've joined one of the most iconic rock bands in the field; that's dream-come-true stuff. I'm very happy."

Simon also recounted the initial call he received to fill in for Morse. He said: "Well, there was talk of me stepping in for Steve temporarily towards the end of last year in 2021, but I never really thought much of it. I never thought much of it because it was always a case of, 'It may happen or it may not happen,' because it depended on Steve's wife's condition as to whether he would be able to tour. But it just got to the stage where Steve decided enough was enough, and he needed to look after his wife, which is an amazing thing he's doing. So, I knew it was possible, but I didn't know for sure; I only really found out recently that I was being confirmed as a permanent replacement."

McBride went on to say that the chemistry was "immediate" between him and the other members of DEEP PURPLE. "We had a few days of rehearsal in May, and that's all we needed. And then we did a few shows in Israel, and places like that, which were my first shows, and all we had was those few days of rehearsal. I know Don [Airey, keyboards] very well, and I've played with Ian [Gillan, vocals] and Roger [Glover, bass] for a long time, so it clicked quickly. But yeah, it was a funny thing — we did the three or four days of rehearsals, but we really only needed one. After the first day, we all looked at each other and said, 'Well, we think it sounds pretty good. We don't really need two extra days.' We got to work straight away, and everybody was very happy. It helps that I'm a very easygoing person, and I get on well with everybody, I think. So, there was never an issue or a thought about if I would get on with them or not. And as I said, I've met them before, knew their personalities, and knew what to expect, so it's been a great atmosphere."

Two months ago, McBride spoke to the "Scars And Guitars" podcast about what it has been like for me him to step into the shoes previously filled by Ritchie Blackmore, Tommy Bolin, Joe Satriani and Steve Morse. Regarding his approach to playing DEEP PURPLE's classic songs, Simon said: "At the end of the day, for me, with this gig, there's been lots of people saying, or asking me will I play like Ritchie or will I play like Steve or will I do this like Tommy or Satriani or whatever. So that thing initially kind of confused me a little bit; I didn't know what to do. It was only when I was talking to [DEEP PURPLE keyboardist] Don Airey about it, and he just said, 'Forget about it all. Just be you. Play your own thing.' That's it. Which I did. And I kind of started to relax a little bit and just be myself.