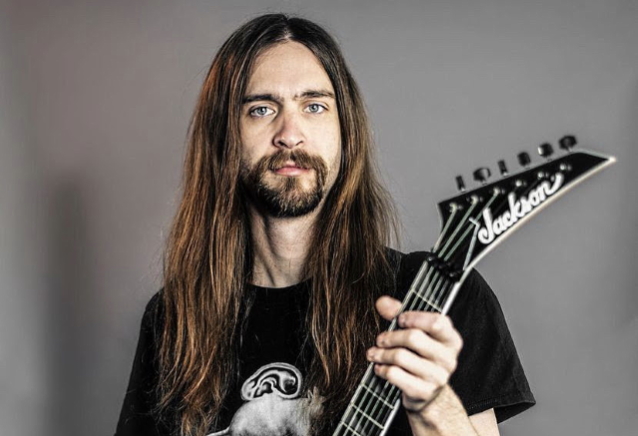 New DEICIDE Guitarist Explains How He Landed The Gig, Says There Is 'Killer' New Material In The Works

Guitarist Taylor Nordberg (THE ABSENCE, INHUMAN CONDITION),who recently joined Florida death metal veterans DEICIDE, spoke about how he landed the gig in a new interview with "The Zach Moonshine Show". He said (as transcribed by BLABBERMOUTH.NET): "In 2019, my band THE ABSENCE toured with DEICIDE in the U.S. And we got to know the guys and got along really well. And I actually found out that Glen [Benton, DEICIDE frontman] lives, like, two streets over from Jeramie [Kling, THE ABSENCE drummer] and I, where we live. So Jeramie and Glen became good buddies and they ride bikes all the times. It's a funny little thing, thinking about that. But long story short, [previous DEICIDE guitarist] Chris [Cannella], I believe he's the head of A&R at Dean Guitars so he's focusing on that for right now. I heard that they needed a guitar player, so I learned a couple of songs, made a couple of videos, and Glen saw 'em and liked what he saw. So we had a couple of practices, and bing bang boom, here we are."

Asked if he has worked on any new material with DEICIDE or if he has just been focusing on getting the old songs down, Taylor said: "Well, when they first asked me to start learning songs, they said, 'Start learning [the] 'Legion' [album], because this year is the 30th anniversary of 'Legion'. So later on in the year, we're gonna be playing it start to finish live. So that's been the main focus over the last couple of weeks — just hammering down those 'Legion' songs, which that's been a blast to just delve into those tunes and that songwriting… Right now, we're focusing on the 'Legion' stuff and then, obviously, me just trying to learn a full set. Otherwise, there is new songs that we've been working on. Like I said, we're kind of just focusing on the 'Legion' stuff for right now, but there's definitely a ton of killer new material on the way. I don't know what the time frame is — when we'll record or anything like that — but there is new music, and it's killer so far."