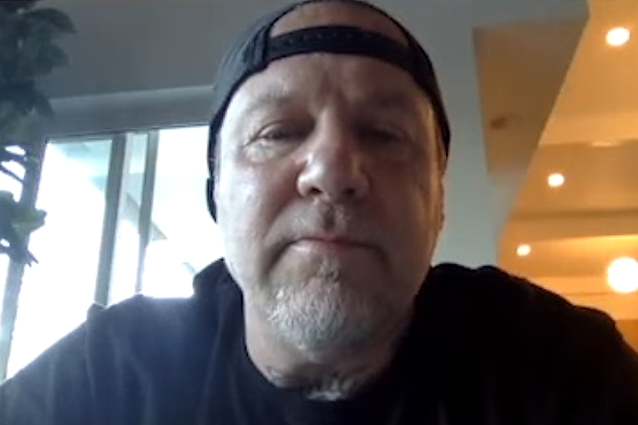 AGNOSTIC FRONT's ROGER MIRET Opens Up About His Cancer Battle: 'I Was Not In A Good Place'

AGNOSTIC FRONT vocalist Roger Miret, who revealed last September that his cancer was in remission, offered an update on his health during a new appearance on the "Smokin Word" podcast, hosted by Hoya Roc from MADBALL. He said (as transcribed by BLABBERMOUTH.NET): "I'm good now. But I was in a place [early last year] where I just needed to be in my own head — just wrap around everything. Between everything that's going on in life, and then throw this shit at it, I was not in a good place. But, man, I sit back and think about it now, I've been through a lot of shit — I've been through a lot of hard shit — and I'm, like, man, I keep going through all this fucking crazy hard shit, but my head's pretty together. Don't get me wrong — there's a lot of nights you stay up thinking and thinking and thinking and thinking. When you hear 'cancer,' the first thing you think is you're gonna die tomorrow. And you've got kids, and you start thinking and thinking, thinking about, 'Man, somehow, some way I'll pull through.' I figured I've gotta pull through. And that was the same situation back in the late '80s when I got incarcerated. I was, like, you pull through — you hold your head up high and pull through. Even back then, in the late '80s, when I had to go through incarceration, it was good for me to be by myself; I needed to… [This time] I didn't wanna see nobody, I didn't wanna talk to nobody. I did a lot of walks by myself. I did a lot of self-isolation. And when everything got finally put out there, I'm grateful that a lot of people gave me my space. 'Cause I know a lot of people worldwide, and everybody was concerned, everybody's, like, 'What's happening?' And I get it, but I really didn't wanna talk about anything; I just wanted to be in my space. The only person I talked to were doctors — so many fucking doctors; so many fucking injections, surgeries, scans. I've got more poison in my body… I'm actually surprised I'm walking."

Asked when fans can expect to see him back on stage with his AGNOSTIC FRONT bandmates, Roger said: "The truth is I'm still under doctor care, and I go there once a month to this one guy, and every few months another one. I just flew to Seattle — I was just in Seattle on Monday and I had to go see a doctor on Tuesday and came back on Wednesday. Just like that. I went to go see a specialist in Seattle 'cause I can't keep playing these games. 'Cause I've got two other concerns. I'm not completely out of the woods. That was the one that was really bad, but I've got two other concerns. Somebody told me about this doctor up there, so I flew out there… He fitted me in. He scanned everything, and I'll know in two more weeks. So I've gotta get all these clearances, but I'm being optimistic, being positive. I've just gotta figure out how to get moving again. 'Cause when you sing, you sing from your gut. But I keep leaving things scheduled. We were supposed to tour in March. In a way I'm glad we're not now, 'cause that's pretty damn close. But I was leaving things open.

"It's hard," he continued. "When you hit the stage and you're, like, 'I'm gonna take it easy,' that don't happen. You just go crazy. But I've really gotta take it easy 'cause I've either gotta focus on breathing, 'cause I've gotta sing, or just jump around like a jerk and let everybody else sing. I can't do both right now. And I'm still not ready; there's still some nerve damage I'm dealing with. I'm in PT, physical therapy, for one, and the other one, it was attached to a nerve bundle. The first operation, they had to pull my bladder off — everything was pulled away — and the doctor told my wife that it's possible [there would be] some nerve damage 'cause it was attached to a nerve bundle. They thought it was gonna be, like, a two-and-a-half-hour surgery; it was almost six hours, and they had to go really careful around the nerves. There's two issues I'm dealing with, and one of the PTs is working the other one. I don't know yet, but they say, 'Give it some time.'"

Miret went on to say that he is "hoping" he can make AGNOSTIC FRONT's tour dates in May but cautioned that "everything keeps getting pushed."

After Miret was diagnosed with cancer in early 2021, a long road of tests and diagnoses led to a complex initial surgery and lengthy hospital stay. Even though the original surgery was complicated, the results were extremely positive. The cancer was successfully removed and Roger is now in complete remission and all signs of cancer have disappeared.

In early October, Roger said that he underwent another surgery after "running a fever for two weeks straight" and developing "an infection."