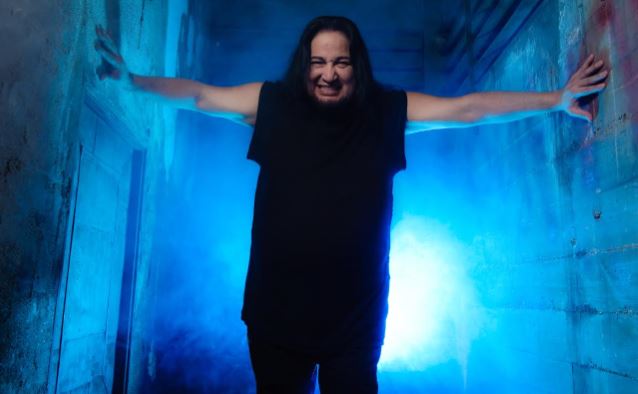 On May 21, Jo Schüftan of Horns Up Rocks! conducted an interview with FEAR FACTORY guitarist Dino Cazares (pictured). You can now listen to the chat in the YouTube below. A couple of excerpts follow (transcribed by BLABBERMOUTH.NET).

On FEAR FACTORY's forthcoming album, "Genexus", due on August 7 via Nuclear Blast Entertainment:

On signing with Nuclear Blast Entertainment, which is headed up by former Roadrunner Records A&R chief Monte Conner:

"I always try to look for the next thing, go to the next level, and definitely going to Nuclear Blast Entertainment was the next level for us. Monte Conner originally signed the band back in 1991 on Roadrunner Records. So when he left there and went to Nuclear Blast and realized that we were available, he definitely approached the band. And it's been a great pleasure working with Monte again. I feel like we've got the old team back. And everything's worked out great so far."

On using a real drummer on "Genexus" compared to 2012's "The Industrialist", which was recorded with a drum machine:

"Yeah, it gives it more of a natural feeling… definitely more of a natural feeling. Obviously, when you start recording, you can add sounds and you can manipulate the sounds any way you want it to sound like. So it's kind of a hybrid between organic and digital; that's what this record sounds like. And I think that's what makes it sound really good. Albums like 'Demanufacture' and 'Obsolete' were the same type of hybrid, and that was the approach that we took on the drums on this record. Also, Deen Castronovo, the drummer of JOURNEY, actually played on one of the tracks on the album."

"We were pretty much already done with the ['Genexus'] record, and in February, we went to Australia to play this festival called the Soundwave festival, and there is where MINISTRY was playing on the same festival, so we got to hang out [together] a lot. And Tony found out that Matt DeVries wasn't gonna be playing with us any longer, because he wanted to focus on his family. So Tony found out and straight away asked me. He goes, 'Hey, man, what's going on? I heard Matt's gonna be leaving.' I'm, like, 'Yeah. Oh my God!' It's, like, he's right in front of me, and why didn't I even think to ask him? You know what I mean?! Maybe because he was doing SOULFLY or something… So when he asked me, I'm, like, 'You're in. You don't have to audition. What are you gonna do about your other bands?' And he goes, 'Well, MINISTRY's gonna be done soon. And I really wanna play with you, man.' And I'm, like, 'Okay. Fuck, you're in. That's it.' That's how quick it was decided."

"Tony's been a friend of mine since way back… back in what I call the 'backyard days.' Because the backyard days was when his band — they were called DOMINION — and my band, FEAR FACTORY, we were doing backyard shows, backyard gigs here in East L.A., in South Central Los Angeles, back when we were in our early teens — 19, 20, 21 years old — doing these shows. So I knew him from way back then. And then when he joined STATIC-X, we took STATIC-X on their first tour in the U.S. — FEAR FACTORY did. And then, obviously, we do ASESINO together, so we've been friends for quite a long time. It's like having my own brother in the band; that's how close and that's how tight we are. And, obviously, he knows the style. He was in STATiC-X, [which] had a lot of similar style of FEAR FACTORY. And, obviously, playing in bands like MINISTRY and SOULFLY and CAVALERA CONSPIRACY and PRONG, he's definitely a bass player that can pretty much adapt to whatever you throw at him — whatever band it is, he can pretty much adapt to it. And, obviously, he's in ASESINO, which is my other project, which is pretty extreme. So I already know that he can handle the picking style. So it's all good. It works out perfect."