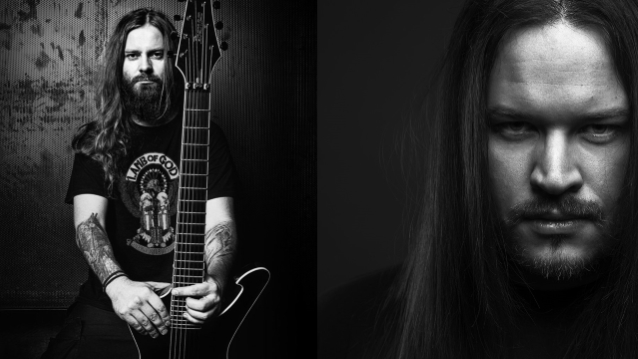 MACHINE HEAD has announced the addition of Polish guitarist Wacław "Vogg" Kiełtyka (DECAPITATED) and British drummer Matt Alston (DEVILMENT, EASTERN FRONT) to the group's ranks. They will join MACHINE HEAD on the first leg of its 25th-anniversary tour for the band's classic debut, "Burn My Eyes". The trek will kick off in Germany on October 5 in Freiburg, and continue across Europe, wrapping in Dublin, Ireland on November 8.

Band visionary and mastermind Robb Flynn stated: "It is an honor to perform alongside Matt and Vogg, these two are straight up 'elite-level' players, and fucking BEASTS on stage! I cannot wait for the Head Cases of the world to get crushed by the heaviness that they will bring. Let's do this!".

Kiełtyka stated about his new gig: "It's a huge honor to be able to play at the same stage with the mighty MACHINE HEAD. I grew up on their music and when I heard I will join them on this tour, I was literally stoked!

"As a 13-year-old, I was learning songs from 'Burn My Eyes' who is still one of my favorite albums EVER, that album had also a big influence on my playing and my guitar skills.

"MACHINE HEAD is not just a band, it's an institution who has still a big influence on how all metal scene looks like, so for me as a musician and also a metal fan it's something special to be able to be a small part of it.

"That will be definitely a huge lesson and experience for me to be a part of such a professional team. Adventure begins, I cannot wait!"

Vogg will continue to perform double duty with his band DECAPITATED, adding: "To all DECAPITATED fans: I will see with you also during DECAPITATED shows in 2020. We do plan also to compose new music for next album so keep an eye on more news!"

Alston commented: "I'm honored to announce that I will be playing drums for MACHINE HEAD for the next world tour cycle alongside Chris Kontos on their 'Burn My Eyes' 25th-anniversary tour.

"It was a pleasure working for MH over last year's world tour, but now having the opportunity to be playing their songs is something I never would have imagined while growing up and listening to their music.

"Pre-production for the upcoming European tour starts on Monday. Needless to say, I can’t fucking wait to get on the road!

"A huge, HUGE thanks to my brother Steve Lagudi for getting me the opportunity to audition, and of course to Robb, Jared, and the whole MH team for welcoming me into this new position."

When he announced his departure from the band, Demmel, who first played with Flynn in VIO-LENCE in the late 1980s and early 1990s, said in a statement saying that it was "simply time" for him "to step away and do something else musically." He later revealed in an interview that he was minimally involved in the making of MACHINE HEAD's latest album, 2018's "Catharsis", a record that he said he hated. He also said that MACHINE HEAD gradually "became a Robb Flynn solo project, and that isn't what I signed up for."

This past June, McClain told "Robb's MetalWorks" that he no longer believed in MACHINE HEAD's songs and musical direction toward the end of his tenure with the band.