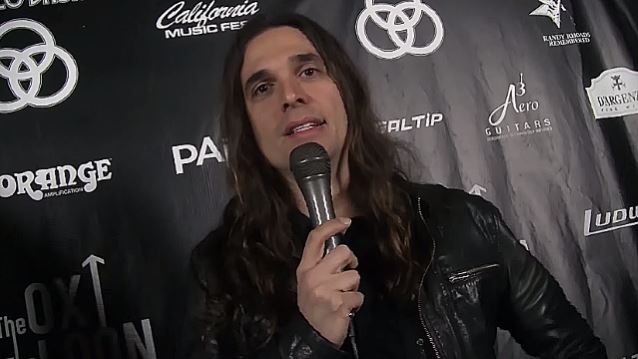 New MEGADETH Guitarist KIKO LOUREIRO On RANDY RHOADS: 'He Was Like A Big Hero For Me'

Brazilian guitarist Kiko Loureiro (MEGADETH, ANGRA) was interviewed by IndiePower at the "Randy Rhoads Remembered: A Celebration Of A Guitar Legend" concert on Janaury 23 at The Observatory in Santa Ana, California. You can now watch the chat below.

Speaking about the influence Randy Rhoads (OZZY OSBOURNE, QUIET RIOT) had on his technique when he was first starting to learn how to play guitar, Kiko said: "I was a very young teenager when I started listening to… discovered Ozzy and then I discovered Randy Rhoads, and I was really, like, every day trying to learn his solos and his riffs — something that [was] really strong and that makes me the guitarist that I am today. So he's really a part of that. The way that he mixed classical music… I don't know… All the new techniques that were going on at that time in guitars. I was just a kid trying to learn guitar and he was like a big hero for me."

He added: "I love acoustic guitar — you know, classical guitar — and I know Randy was really into classical music and acoustic guitar. That brings you this peace inside you. And then you bring this to this rock moment. I don't know how to explain that, really. I think all the musicians could understand that. But, yeah, this mix of classical music, the scales, the peace that you have inside and you can express yourself through the guitar. So, mixing this rock and roll and the classical music; that was his approach that was really important for me."

MEGADETH announced on April 2 that Loureiro had joined the Dave Mustaine-led group as the replacement for Chris Broderick. Mustaine said in a statement: "I first met Kiko around eight years ago for a cover shoot for Burrn! magazine. I had no idea who he was, other than the fact he was tremendously talented and that the staff from Burrn! held him in high regard. Since then, I've come to see what a guitar virtuoso he is, and I'm deeply encouraged by his depth and talent."

He continued: "Very few MEGADETH alumni have had the same feel and ability as Kiko."

In addition to Mustaine, Loureiro and bassist David Ellefson, the recording lineup for MEGADETH's forthcoming album will include LAMB OF GOD drummer Chris Adler.