KnuckleBonz has announced plans to create limited-edition MOTÖRHEAD statues and has entered into an agreement with Global Merchandising, the representative for the worldwide merchandising rights for MOTÖRHEAD.

"We are delighted to see Lemmy remembered so excellently from his younger years," says MOTÖRHEAD manager Todd Singerman. "It is also time to give fans who collect these superior quality pieces a Warpig, and again, the care and detail used in recreating this icon is something to behold."

KnuckleBonz is honored to create a second edition of Lemmy Kilmister in the Rock Iconz series; this statue depicts the rock legend during a classic mid-'80s era of his career. The company is also in production on a Warpig limited-editon statue. KnuckleBonz, the creator of the Rock Iconz music collectible series, has been developing iconic, high-quality statues of the legend of rock music since 2003.

The Lemmy II Rock Iconz statue features Lemmy Kilmister during the classic 1980s era of MOTÖRHEAD. The statue is crafted with great care to get a certain quality and likeness. Each collectible is hand- painted and numbered. These are limited to only 3000 pieces created worldwide are highly collectible. The first statue of Lemmy in the Rock Iconz series sold out in 2015.

"It seems like just last week we worked with Lemmy and MOTÖRHEAD to create our first Rock Iconz project, but it's been over three years," says Tony Simerman, CEO/creative director of KnuckleBonz, Inc. "This project is obviously different since we lost Lemmy. We hope these designs from the classic era of MOTÖRHEAD will allow fans to reconnect and appreciate how good MOTÖRHEAD was for so long."

The Warpig Rock Iconz statue is sculpted on a base of rock where MOTÖRHEAD fans will recognize iconic imagery appearing in the rubble at the base of the statue, such as helmets, ammunition, skulls, chains and knights crosses.

The Warpig Rock Iconz collectible is hand-painted and numbered and comes with a certificate of authenticity on the base. This is a limited-edition statue; only 3000 created. These collectibles are created in 1/9 scale, making the average height of each statue approximately 9" tall. Each statue ships in a custom package and ships worldwide.

Each statue sells for $125 USD and ships worldwide. While the shipping date has not yet been released, the production staff is working toward a ship date in the fall of 2017. Final details on availability will be available at Facebook and at Knucklebonz.com. Pre-orders are available at Knucklebonz.com to reserve one of these limited edition MOTÖRHEAD collectibles. Orders are shipped in the order they are received. Each statue is officially licensed. Only 3000 of each statue will be created. 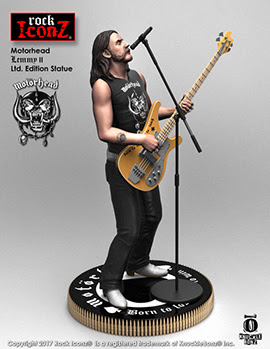 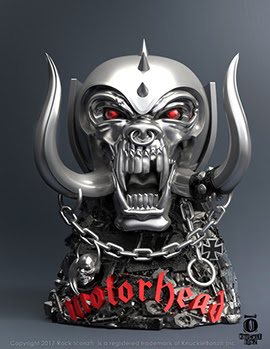