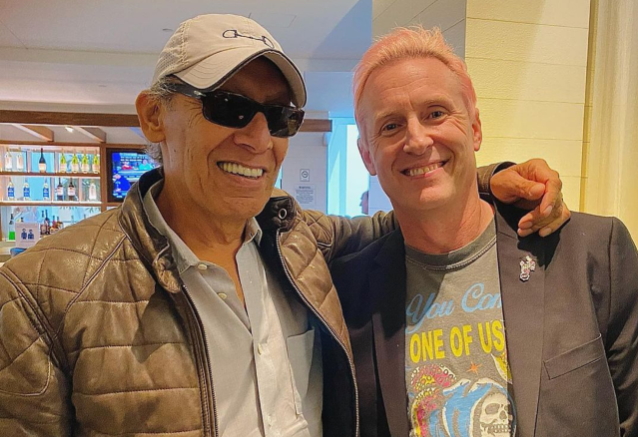 On Wednesday (August 17), Josh Freese, a top Los Angeles session musician who has played with DEVO, THE VANDALS, NINE INCH NAILS, A PERFECT CIRCLE and GUNS N' ROSES, took to his Instagram to share a picture of him with Alex, and he included the following message: "Epic Epic Epic! Just ran into Alex Van Halen (my first drum hero) at LAX and talked for 30 mins. Haven't seen him in years. It was so great to reconnect. Crazy, I was with @wolfvanhalen yesterday and was asking him how his uncle's been doing. Bizarre! Not pictured is @markguiliana who I ran into 5 mins later. Drummer craziness at LAX this afternoon. #alexvanhalen #markguiliana #drummers #vanhalen".

Last year, former VAN HALEN singer Sammy Hagar said that he had tried to reach out to Alex after Eddie Van Halen's death but that he was rebuffed.

When Alex turned 68 in May 2021, he commemorated the occasion by sharing the following statement: "First birthday without you, Ed. The view from my drum set will never be the same. VH forever!"

Eddie passed away in October 2020 at St. John's Hospital in Santa Monica, California. Alex was by his side, as was Eddie's son, Wolfgang. The axeman died from complications due to cancer, his son confirmed.

Alex and Eddie Van Halen formed a band called MAMMOTH in Pasadena, California in 1972, then renamed it VAN HALEN when singer David Lee Roth joined the group and, later, Anthony.

Earlier this year, it was confirmed that Alex had been in talks with Roth and guitarist Joe Satriani to put on a special show in honor of Eddie. However, Wolfgang later said that it was "in such an early stage that it never even got off the ground."