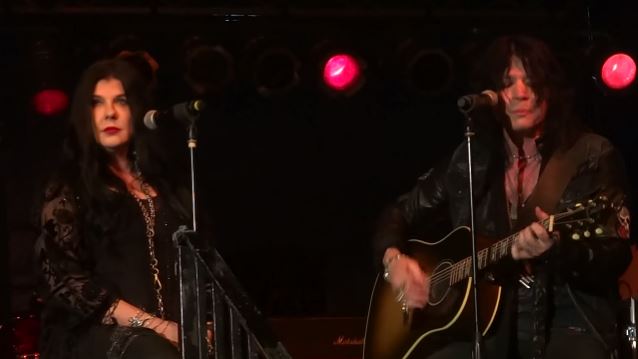 Video: TOM KEIFER And Wife Perform CINDERELLA's 'Don't Know What You Got' At Lycoming County Fair

Fan-filmed video footage of CINDERELLA frontman Tom Keifer and his wife, Nashville singer-songwriter Savannah Snow, performing the CINDERELLA classic "Don't Know What You Got (Till It's Gone)" on July 24 at the Lycoming County Fair in Hughesville, Pennsylvania can be seen below (footage filmed and uploaded by Randy Gill).

Savannah wrote and co-produced some of Keifer's debut solo album, "The Way Life Goes", which sold 5,400 copies in the United States in its first week of release to land at position No. 78 on The Billboard 200 chart. The CD was released on in April 2013 via Merovee Records (through Warner Music Group's Independent Label Group).

In a 2013 interview with Daily News, Tom stated about his wife: "She is a very talented singer/songwriter in her own right, probably one of the best songwriters I've ever met. She is the co-producer [on 'The Way Life Goes'], and she wrote a lot of the songs on the record."