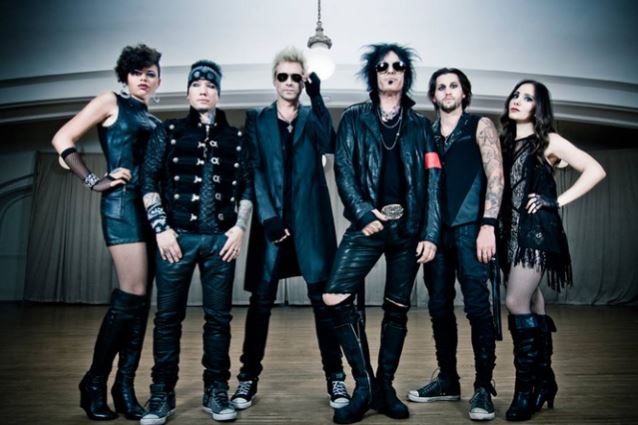 Dustin Steinke spoke to The Orillia Packet & Times about how he became the full-time drummer for SIXX: A.M., originally formed as a side-project for MÖTLEY CRÜE bassist Nikki Sixx. The band is rounded out by lead singer James Michael, who has worked as a producer with a number of artists like Sammy Hagar and SCORPIONS, and DJ Ashba, who served as lead guitarist for GUNS N' ROSES for six years before quitting in 2015.

Steinke was originally approached to play with SIXX: A.M. for a one-off show at the legendary Budokan Hall in Japan as well as a North American tour in the spring of 2015. "And at the end of that tour — at the very last show — Nikki sat with me and he said, 'This is your gig if you want it. No one's going to take it from you. You don't have to worry,'" Steinke said.

"It's weird. There's still days where I'm like, what the heck is going on?"

Steinke was previously a member of the Canadian rock group BLEEKER (formerly BLEEKER RIDGE),which was signed to the Canadian branch of Roadrunner Records and completed work on an album with Michael at the production helm.

"I've only ever played with those guys," said Steinke, referring to his former bandmates in BLEEKER. "[Leaving that band] was the hard part. I didn't want to upset them. I didn't want to lose the friendship. Nikki offered me the part at the end of April. It probably took me from then until the end of October to make a decision."

SIXX: A.M. will release a new single, "Rise", on March 1. The track will appear on a forthcoming first volume of a double album, due later this year.

Nikki previously said that SIXX: A.M.'s new effort would contain over 22 songs and would be tied in with a 24-month world tour.