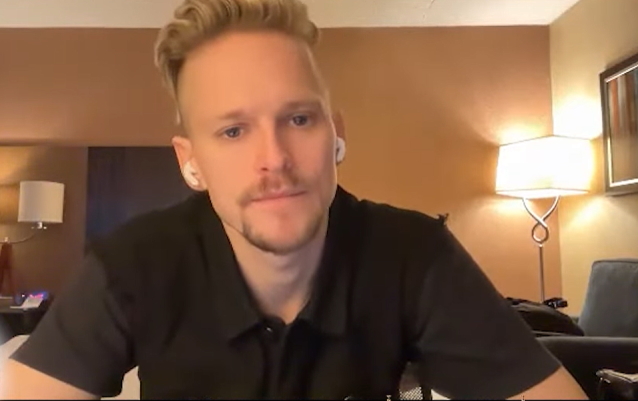 New SKID ROW vocalist Erik Grönwall spoke to The Rock N' Roll & Coffee Show about how he has been accepted by the band's fans since he joined the group earlier this year as the replacement for ZP Theart. He said: "There's so many different types of fans. I've realized that… 'Cause when we did the show in California, [some] people came up to me after the show, and they were, like, 'Sebastian [Bach], you've still got it.' [Laughs] Yeah, that happened. Then you have the fans who still think that Sebastian is in the band, and then you have the fans who know the whole story."

Erik, who made his recording debut with SKID ROW on the just-released new studio album, "The Gang's All Here", went on to say that he isn't bothered by the fact that some fans are still clamoring for a reunion of the band's classic lineup.

"The Gang's All Here" arrived on October 14 via earMUSIC. The group recorded most of the LP in Nashville, Tennessee with producer Nick Raskulinecz, who has previously worked with FOO FIGHTERS, STONE SOUR, HALESTORM, EVANESCENCE, RUSH and ALICE IN CHAINS, among many others.

Grönwall, who auditioned for the competition show "Swedish Idol" back in 2009 by singing a cover of SKID ROW's "18 And Life", joined SKID ROW in January. Theart, who had been in the group for more than six years, played his final gig with SKID ROW in February before being officially given the boot.

In September 2021, Grönwall announced that he was cancer free after receiving a bone marrow transplant. "Some anonymous wonderful human being somewhere in the world donated his/her blood cells so that I could get a second chance at life," he told Headbangers Lifestyle in January. "Sometimes I can just get tears in my eyes when I think about it. It's so beautiful that one person who is not connected to me in any way wanted to do that for me. He/she doesn't know that the blood cells were for me. It's completely anonymous."