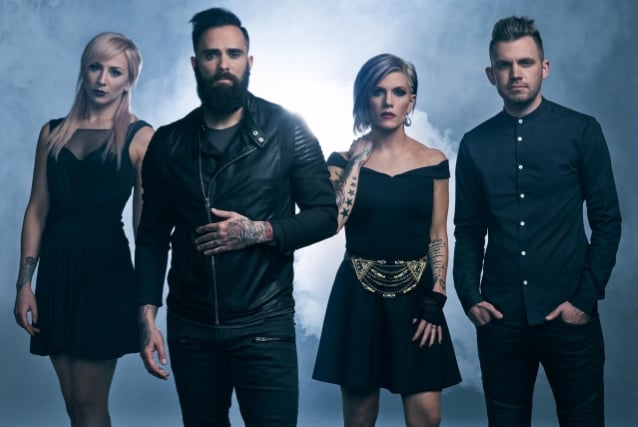 New SKILLET Single To Arrive In May

SKILLET frontman John Cooper has confirmed to Backstage Entertainment that the band's new album will arrive this summer. "Just listened to mixes today as we speak," John said in an interview that was conducted on March 27 (see video below). "Got a few more… nitpicking, I guess, with the mixes. But they're almost done. The record will be done any day now [and] released this summer. We have a single coming in May, and I hope it's good. [Laughs]"

He continued: "Sometimes, when you work on a record for a long time, you do get kind of, like, 'Okay, I thought this was good a year ago, and I hope it's still good.' But it's unnerving, especially when you wait for three years. The longer you wait, the more epic it has to be — like waiting for a sequel.

At some of its recent concerts, SKILLET has been performed two new songs live, apparently titled "Rise Up" and "Dead Man Walking".

Last fall, John told Consequence Of Sound that SKILLET's next album would "be a bit heavier" than 2016's "Unleashed". But, he added, "We're going to have those arena anthems and also some duets with Jen [Ledger, drummer] and me, which our fans love. I'm excited for it."

"Unleashed" was recently certified gold after accumulating half a million certified units. The distinction follows on the success of lead single "Feel Invincible", which was gold-certified in 2018. "Unleashed" is the fourth consecutive SKILLET record to receive certification of either gold, platinum or double platinum.