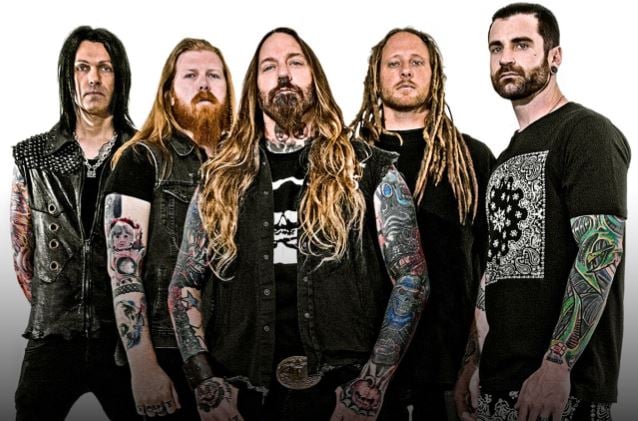 "Daybreak", a brand new song from California's groove metal juggernauts DEVILDRIVER, can be streamed below. The track is taken fromthe band's seventh studio album, "Trust No One", which will be released on May 13 via Napalm Records. The follow-up to 2013's "Winter Kills" was once again produced by Mark Lewis (ARSIS, THE BLACK DAHLIA MURDER, WHITECHAPEL, DEVILDRIVER, DEICIDE, SIX FEET UNDER) with assistance from Jason Suecof (AUGUST BURNS RED, DEICIDE, DEATH ANGEL). The new CD marks the group's first release since the departures of guitarist Jeff Kendrick and drummer John Boecklin and addition of axeman Neal Tiemann and former CHIMAIRA sticksman Austin D'Amond.

Comments DEVILDRIVER singer Dez Fafara: "This song is about not fearing the unknown, and never giving up in life no matter what life throws at you, learning to hold your head high through even the darkest of times."

Adds guitarist Mike Spreitzer: "'Daybreak' is the first song that our new guitarist Neal brought to the table early in the writing process. He had a great deal of tunes to show me when he first joined the band. After listening to all of them, 'Daybreak' was the first one that I felt deserved a place on the record."

"Trust No One" track listing:

Said Fafara: "'Trust No One' is a vicious record filled with huge grooves and big hooks, guitar bass assery and thundering drums!Lyrically it goes to a realistic space exploring a ton of different emotion and headspaces regarding being human and what it means to exist. The band worked long hours writing as well as in the studio along with our producer to forge 'Trust No One'! I hope you turn it the fuck up and enjoy this record from start to finish!"

Added Spreitzer: "'Trust No One' is the record that I’ve been wanting to write for twelve years."

DEVILDRIVER recently tapped former WAYNE STATIC guitarist Diego Ibarra (a.k.a. Ashes) to play bass on its upcoming tour, which kicks off at the end of next month.

DEVILDRIVER will be touring non-stop this year in support of its new album, "Trust No One". In addition to its already announced tour alongside HATEBREED, DEVIL YOU KNOW and ACT OF DEFIANCE, DEVILDRIVER has confirmed a string of North American headline dates. The first run starts prior to the HATEBREED tour and kicks off April 27 in Las Vegas, Nevada and wraps May 11 in Grand Rapids, Michigan. Following the tour with HATEBREED that runs from May 13 in Cleveland, Ohio through June 11 in New Haven, Connecticut, DEVILDRIVER will have another string of headline shows starting July 13 in Columbus, Ohio and going through June 18 in San Diego, California.