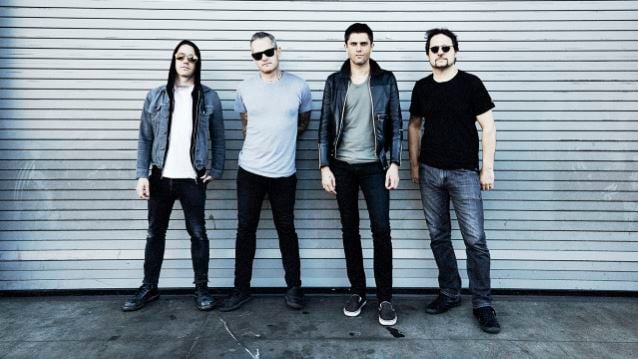 "We'll Sleep When They're Dead", the first official studio recording from DEAD CROSS, the new "punk" outfit featuring former SLAYER and PHILM drummer Dave Lombardo alongside members of THE LOCUST and RETOX, can be streamed using the SoundCloud widget below. The recording sessions for the song were helmed by producer Ross Robinson, who has previously worked with KORN, DEFTONES, SEPULTURA and LIMP BIZKIT, among others.

"This band provokes my aggression," Lombardo tells Rolling Stone. "We, Ross included, all have fearless musical mindsets. Our collective résumés definitely reflect that. I believe that when you have musicians in a room that share that particular attribute, it takes you to another level in every way. With this band, I play harder, I play faster, and I play with the fury that this music demands. Each member brings a great deal of intensity and skill to the table. It's invigorating to work with them."

Lombardo previously described DEAD CROSS's sound to Noisey as "just straightforward brutal punk— metal-esque, but it's definitely not metal. I think it definitely leans more towards the punk style, because I feel that the way things are in the world, a punk attitude is definitely necessary to help you along with the shit that's going on. There's no time to sing 'We Are the World' or all this bullshit, we're all pissed right now, and there's no better way to release anger than to be in a punk band and write punk music."