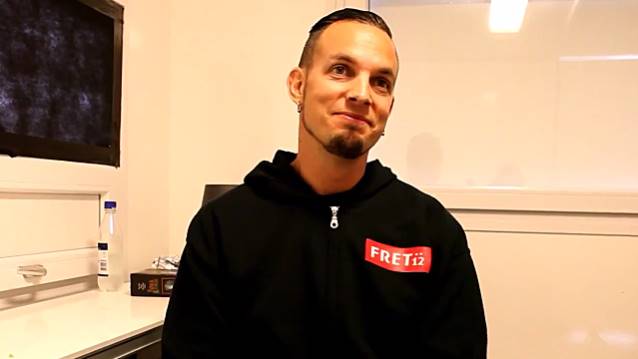 TREMONTI, the band led by CREED and ALTER BRIDGE guitarist Mark Tremonti, will release its second album, "Cauterize", on June 9. But Mark Tremonti told The Pulse Of Radio that "Cauterize" is not the only disc he has coming out in the near future. "We put together two albums," he said. "We have this album that's [coming] out, but in the same recording session we recorded another album called 'Dust'. That's gonna be coming out who knows when, but probably within a year. So I want people to know that that record is part two of this record. It's not necessarily record three, it's just the second disc of this album. So there's two 10-song albums."

The follow-up to 2012's "All I Was", TREMONTI's new CD was helmed by producer Michael "Elvis" Baskette, who previously worked with ALTER BRIDGE and SLASH.

Tremonti recorded "All I Was" using ideas rejected by his ALTER BRIDGE bandmates, who felt some of the material was too "speed metal" for their sound. Tremonti revealed, "I tried it with them about 10 times and it would never stick. I didn't want those ideas to go to waste . . . Now it's a living, breathing band so we gotta keep it going."