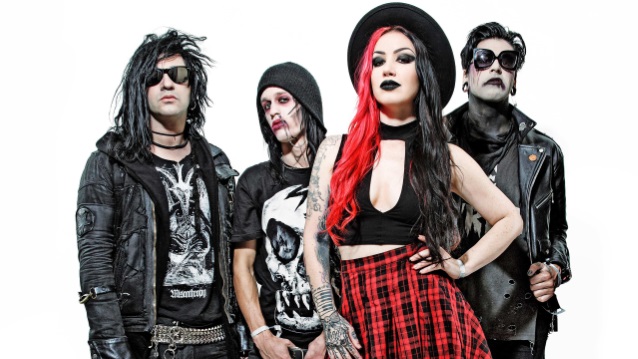 NEW YEARS DAY's video for the song "Disgust Me" can be seen below. The track is the sole new original piece of music on the band's latest EP, "Diary Of A Creep", which was released in January via RED/Century Media.

"Diary Of A Creep", which follows the tradition of landmark releases like "Garage Days" by METALLICA, sees NEW YEARS DAY paying tribute to the artists who shaped the band, even as they continually redefine their music with each successive bold stage of their evolution.

NEW YEARS DAY singer Ash Costello told Consequence Of Sound: "The song 'Disgust Me' is about seeing the side of someone that they tend to hide. Whether it be because they have deemed it undesirable or unattractive for whatever reason or out of fear of being judged as less than because of the dark sides they possess. 'Disgust Me' is asking the listener to not be afraid to show these parts because it just may bring you relief instead of sorrow."

She added: "For the video, I wanted to show that visually. I am asked a lot why I decided to dye my hair half red and half black, so I saw the 'Disgust Me' music video as an opportunity to give that a story of its own. The all-black-haired girl calling upon the dark spirits to show themselves, and the all-red-haired girl who’s been lost alone in the wilderness, coming together to make one whole person. To me it felt symbolic, like the two sides of me can both shine, the light and the dark."