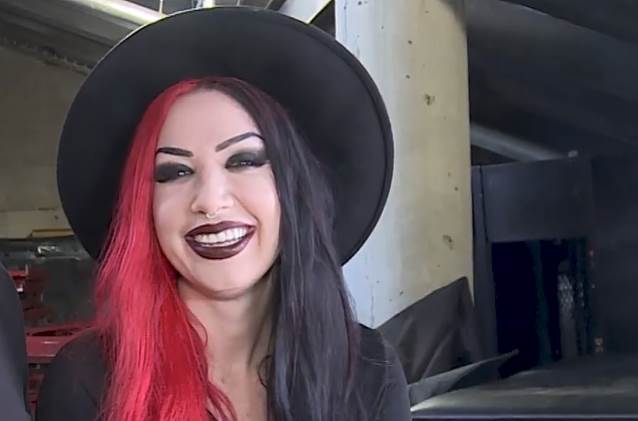 NEW YEARS DAY Vocalist On Touring With HALESTORM and IN THIS MOMENT: 'It Feels Like There's A Movement'

During last month's Rock On The Range festival in Columbus, Ohio, Lou Brutus of HardDrive Radio spoke with Ash Costello of NEW YEARS DAY. The full conversation can be viewed below. A few excerpts follow (as transcribed by BLABBERMOUTH.NET).

On the group's recent tour with HALESTORM and IN THIS MOMENT:

Ash: "I've toured with HALESTORM separate, and I've toured with IN THIS MOMENT separate, so I knew of the magic of both women, but what I didn't know is what being on this tour was going to really feel like. I don't want to say it's some sort of 'coming into [bloom] for women in rock,' because it's not — women [have] always been there, but it feels different. It feels powerful. It feels like there's a movement. There's so many people there to support what we're all doing, and it's just mind-blowing. The shows have been amazing. There is going to be another leg in the summer, and then there's some surprises for the end of the year, but I can't tell anybody yet — but it's going to go for as long as we can make it go, because we have all fallen in love with each other and I don't think we want to separate just yet."

On whether it bothers her when people say "girl rocker" rather than just "rocker":

Ash: "Back in the day, I used to encounter that a lot. I won't say the record label's name, but I remember they said, 'We don't want to sign you. We already have one girl.' That was kind of the mentality. Now, I really feel like there's a major shift, and people are like, 'We don't have enough girls. We need more girls. The girls are where it's at.'"

On her female musical heroes:

Ash: "Billie Holiday was one of my favorites growing up, and then Siouxsie Sioux — obviously, I'm a goth girl, so Siouxsie Sioux was a big influence on me. The makeup, especially, and her hair, and her style, and her kind of cat swagger on stage, when I was younger, was a big influence on me. BLONDIE — so sassy, so bold. And then of course, me being an Anaheim girl in the '90s, Gwen Stefani. She's my number one major influence because she walked this fine line between kick-you-in-the-face, punch-your-teeth-in and being so girly and feminine. I always wanted to embody it just like her. I use her as my inspiration a lot, because a lot of the times, I think, 'How could I possibly fit more on to my plate?' I've got two clothing lines; I am starting a book, and I'm trying to get more serious about that; and I'm in two bands — THE HAXANS and NEW YEARS DAY. I often think of her, and I think if she can be a mom and have all these different facets — a solo career, NO DOUBT, the clothing line, everything she does — if Gwen Stefani can do it and still look that good, so can I."

The next leg of the HALESTORM, IN THIS MOMENT and NEW YEARS DAY tour will begin July 27 in Kansas City, Missouri.

NEW YEARS DAY's latest release was the "Diary Of A Creep" EP, which came out in January via RED/Century Media. The effort follows the tradition of landmark releases like "Garage Days" by METALLICA by paying tribute to the artists who shaped NEW YEARS DAY.