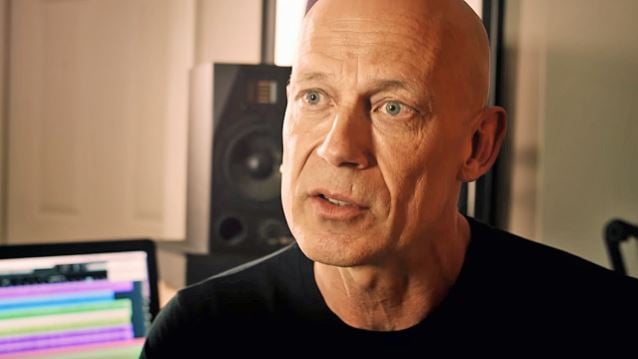 Guitarist Wolf Hoffmann of German/American metallers ACCEPT spoke to Metal Wani's Laura Vezer about the band's upcoming follow-up to 2014's "Blind Rage" album, which will be released next year via Nuclear Blast. Regarding the new disc's musical direction, Wolf said (hear audio below): "I can tell you it won't be dramatically different. My feeling is, and I'm way too close to it and it's not even half finished, so I don't really know which turn it's gonna take, but it feels pretty heavy in places — actually, maybe a little heavier than 'Blind Rage'. But it's all relative. It feels that way to me. I'm not making any sort of meaningful predictions here; it's just a gut feeling at this point. But it won't be dramatically different, 'cause we're really trying to sound like we've always sounded, only as good as ever, better than ever — better, stronger songs, but not any different directions per se."

Wolf also spoke about the difficulties ACCEPT will face trying to complete the new album while it spends much of early 2017 on the road in Europe as the support act for SABATON. "Yeah, it's gonna be a little challenging," he said. "I'm actually gonna try to do some work on the road. Like I said, we've got a lot in the can already, we've got some basic tracks, so there's some material I'm gonna try to take on the road and try to finish or make some progress on while we're on the road. This usually doesn't work very well, but I'm gonna try again. And if it doesn't work, there's still some time left right when we come back and… Let's see, that's April. May is when we really have to get the stuff finalized, because if we want it to come out in July or August, that means if you count back three months, or two and a half months, which is what the label always asks for, then we have to deliver everything by maybe the end of May."

He added: "We've taken our time to write the songs all year, so it's been a good, long process already. We've been under much worse time pressure. This time it's actually quite cushy."

Regarding the importance of making ACCEPT albums that are stylistically similar to the band's classic offerings, Wolf said: "We've sort of had a period in the '90s where we experimented a little bit, and for a lot of fans that was already too much, but my excuse is the '90s were a difficult time for everybody. But, having done all that, when we got back together eight years ago with [current ACCEPT singer] Mark Tornillo, we made a few, sort of, vows to ourselves. First of all, we wanted to write songs, or albums, that are meaningful and not just live off the past. We wanted to really make current albums that are as good as anything we've ever done in the past; that is one. And the other thing is, stylistically, we said we're not gonna try stuff that we know is not gonna work. We're not gonna try a bunch of ballads, we're not gonna try any radio hits, we're not gonna do any of that sort of thing what we've already done in the past. We know what we should sound like, we know the style that ACCEPT is known for, and we thought we knew what the fans want to hear from us, and that's what we try to do. You try to do what you do best and not try to be somebody else."

ACCEPT will release a new live set titled "Restless And Live" on January 13, 2017 via Nuclear Blast. This package will include the entire show ACCEPT played at 2015's Bang Your Head!!! festival in Balingen, Germany on Blu-ray/DVD plus two CDs.