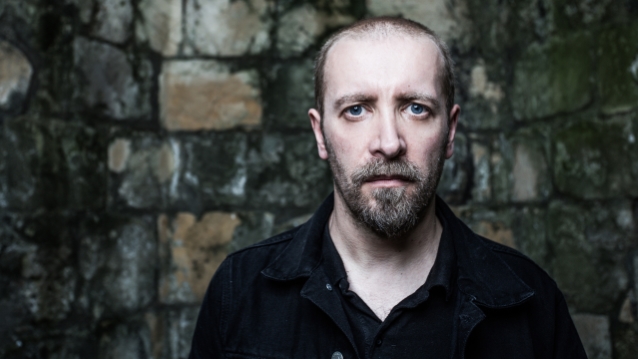 NICK HOLMES On PARADISE LOST Returning To Its Gothic Doom Roots On 'Medusa': 'It's Like Putting On An Old Jacket'

Mark Uricheck of "The Rock Writer's Ramble" podcast recently conducted an interview with frontman Nick Holmes of British gothic doom pioneers PARADISE LOST. You can listen to the entire chat via the Spreaker widget below. A few excerpts follow (transcribed by BLABBERMOUTH.NET).

On how he and lead guitarist/primary songwriter Greg Mackintosh still manage to "push the envelope" after 15 studio albums:

Nick: "We're just very passionate about it; we always have been. But I think with the latest album ['Medusa'], we hinted at it with the song 'Beneath Broken Earth', on 'The Plague Within' album. We were surprised how good that came out and we thought, 'Let's take this further and do a full album in that style.' Obviously, it's also a style we haven't done for a lot of years as well. Obviously, when you take a break from something and come back to it, it seems quite refreshing to do it again. Over a 30-year span of the band, we've had periods where we have had periods where we haven't done anything like this. We've changed styles quite a few times over the years. It's always nice to come back to it. It's like putting on an old jacket that you find — I always use that analogy. It fits right and it's still comfortable. [Laughs] That's the best way I can put it."

On why very few PARADISE LOST albums sound similar to one another:

Nick: "As clichéd as it is, it is a natural evolution. I also think life goes in cycles. We kind of always think of the best period of our life, the best period musically was when we were truly passionate about music was when we were kids and we didn't have any responsibilities. Everything from being 15 years old to being 23, that period of music we listened to then will always be with us all of our lives. Most people have a similar kind of thing. When you get older, you look back at things, you think of when before you had responsibilities and kids and all these kinds of things. It's quite refreshing to revisit those times. Like I said, 30 years, there's a lot of cycles going on. You come back to stuff again and again. You take a break and you come back. Yeah, that natural evolution, I guess. [Laughs]"

On whether PARADISE LOST finds any inspiration from contemporary bands or metal's various sub-genres:

Nick: "Greg is a really big fan of underground death metal stuff. He absolutely loves it. He just listens to it all the time. He loves new bands; he loves the new death metal bands. The noisier the better, he loves it. For me, I'm more like cherry picking. I can listen to 20 bands and I might find one that I quite like. I don't listen to things because just they're popular and I don't care what people listen to; it doesn't bother me. Now and again, I'll hear a band and they'll just strike a chord with me. It's very rare and it's not even that often — it can be every five years. Obviously, we still like the old stuff and still like the bands we liked as kids. I can put on POSSESSED's 'Seven Churches' now and still enjoy it now as much as I did when I was 18 years old. Yeah, I'm pretty fussy with it. I know exactly what I like. It's not always what everybody else likes. I don't really care what everyone else likes."

On what it's like having to switch between various vocal styles during a live show:

Nick: "I think it just means I've got to look after myself and look after my voice. It's more about when I'm not onstage, if I'm honest. I don't go out partying, I don't go to nightclubs, I keep quiet after the shows. I don't do all the things that everyone thinks that people in bands do. It's just so I can do it onstage and do it effectively. I have to really take care of myself. Like I said, I'm not a young man either. You have to be careful with what you do and don't do and what you eat and how much you sleep. All the boring things like that. I also have a lot of time I can experiment with different styles I can do, because we obviously have our home studios where we can do things like that. It's not like in the old days when you got in the studio and you could find out there and then if you could do it or not. We have more luxury now so you can experiment more."

On PARADISE LOST's legacy and whether he sees their sound in other bands:

Nick: "Maybe there's a lot of bands now that are classified as older bands that I know were fans of PL. ANATHEMA when they started out; CRADLE OF FILTH was as well. They also, CRADLE OF FILTH, they influenced loads of bands. It sort of carries on down through the years. New bands influence other bands and it carries on like that. The band BATHORY have influenced an entire genre, but maybe a lot of new guys who play in black metal bands, they don't know much about BATHORY even though they might even sound like them and don't realize it. We've been around a long time. It's very flattering that people thought of us as an influence, but at the same time, we keep doing what we do and we keep moving forward."

On whether he ever thought PARADISE LOST would turn into his career upon the band's 1988 formation:

Nick: "No. I mean, I'm still wondering what I'm going to do for a job after the band, if I'm honest. [Laughs] I'm going to be a postman or something. No, absolutely not — you can never look too far ahead in a band. It's such a frail industry to be in. You can never plan ahead. Just when it's going great, it can just end really quickly. It's a very flimsy industry to be in. So, yeah, you just got to ride while you can and just keep your fingers crossed. There's so much luck involved. There's luck in everything in life, but in music, there's so much luck involved, I think."

PARADISE LOST will embark on a North American headlining tour with Iceland's premiere psychedelic post-metal export SÓLSTAFIR, as well as THE ATLAS MOTH. The tour kicks off October 2 in Baltimore, Maryland and wraps October 21 in San Francisco, California.

"Medusa" was released in September 2017 via Nuclear Blast. The artwork was created by Branca Studio and shows the infamous Gorgone Medusa from Greek mythology, carrying venomous snakes as hair and turning anyone into stone who would dare to look into her eyes.