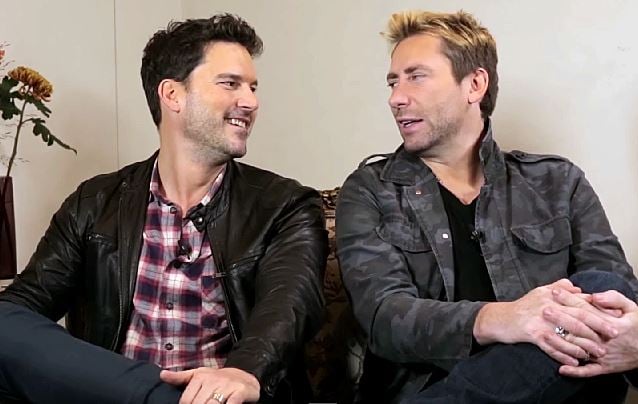 Samuli Väänänen of Finland's Radio Nova last week conducted an interview with guitarist Ryan Peake and guitarist/vocalist Chad Kroeger of Canadian rockers NICKELBACK. You can now watch the chat below. A couple of excerpts follow (transcribed by BLABBERMOUTH.NET).

On how it feels to be hated by so many people:

Chad: "My brother, Mike, the bass player in the band, he hangs out with [METALLICA frontman] James Hetfield a lot in Maui. So the two of them are hanging out a lot together. And right when you think that you're the only one who gets it — the backlash — Mike's, like, 'Oh no. James pretty much thinks the entire world hates him.' I'm, like, 'Really?' Suddenly I don't feel so bad anymore."

On what they would like to leave to the world when there is no more NICKELBACK:

Ryan: "I would like when people hear the songs, even one song of ours, that they think back to a good time, a happy time. You ever hear that song where you're just kind of, like, smiling [and happy]. Whatever the moment was in your life, that's what it's like for me when I listen to songs [like that]. I remember where I was, I remember what I was doing. That's a trigger for me. And that band's a part of my life. That would be nice if we could be that for somebody."

Chad: "A friend of mine was saying, 'As long as there is music being played, your music will now be forever in the history of music. How does that feel?' And that was just, like… I was thinking to myself, I can't imagine, like, a hundred years from now somebody enjoying one of our songs. But I'm sure Beethoven thought the same thing. No [I'm not comparing us to Beethoven], I'm talking about someone who has been around for that amount of time. I didn't compare myself to the greatness of Beethoven. But it's daunting. It makes you feel small to have created something that could be enjoyed-slash-hated for hundreds of years. And I would love to somehow hear what somebody would say about some of the songs that we've written a hundred years from now, how they would respond to it or think about it. I think that's wonderful."

NICKELBACK's eighth studio album, "No Fixed Address", arrived in stores on Monday (November 17) and follows up the Canadian act's 2011 effort "Here And Now". With the music industry changing and people finding new ways to deliver and obtain music, The Pulse Of Radio asked Chad Kroeger if he thought releasing a full album of new material was quickly becoming old-fashioned. "Well, we tossed around the idea of just doing an EP, but the manager was dead set against it, and the label wasn't really too enthused about that idea either," he said. "We don't really subscribe to the theory of 'Okay, three singles, maybe four, let's put all our focus and attention into those and then, you know, we'll just put a bunch of filler on the album and away we go.' I mean, we've never really done that and I think that has really contributed to our success."

The critics, as usual, aren't flocking to embrace the new NICKELBACK disc. The Edmonton Journal's review said that "Kroeger and crew sound calculated and even desperate in their attempt to appeal to as many fans as possible," while the New York Post proclaimed that the new disc "is filled with the same watered-down grunge rock as always."