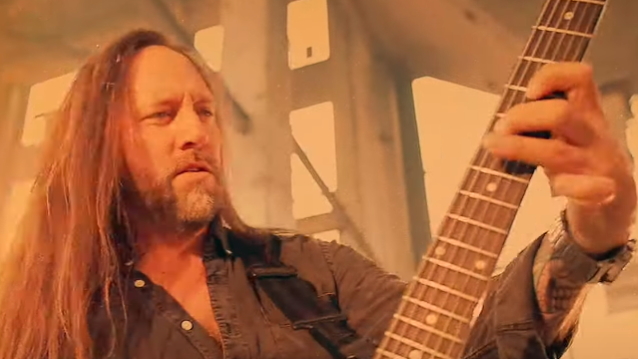 NICLAS ENGELIN Says He Is Still A Member Of IN FLAMES

Guitarist Niclas Engelin, who has been sitting out IN FLAMES' tour dates for the past year and a half, was asked in a new interview with the "MetalBreak" podcast what his "future" with the band is. He responded (hear audio below),"I choose to pass on that [question]," before quickly adding, "I'm still in the band."

Engelin's replacement for IN FLAMES' live shows for most of 2019 and early 2020 has been former MEGADETH and current ACT OF DEFIANCE guitarist Chris Broderick.

Engelin is not listed as a member of IN FLAMES on the band's Facebook page (Broderick is),and he is not featured in any of IN FLAMES' current promotional photos from the group's record label, Nuclear Blast.

Back in April 2019, IN FLAMES singer Anders Fridén told Sticks For Stones that Broderick was doing a "great" job filling in for Engelin.

"We've known [Chris] for 17 years," Anders said. "He was in a band called JAG PANZER, and they opened up for us back then, so we've been friends since. And when Niclas called us, like 48 hours before we had to leave, and he went to the hospital — he had to. So we didn't wanna cancel. Our music is made for two guitars, and we didn't wanna have one guitar playing and everything else on a backing track — we wanted to have someone playing it. We happily found out that Chris was free and he came out and we had a couple of days' rehearsal in Austin before the tour started in Houston. And, yeah, it's going great. We've known him, as I said, for a long time, so we knew it would work on a social level. And [his] guitar [playing] is obviously phenomenal."

Engelin is currently involved with a band called WE SELL THE DEAD, which released its sophomore album, "Black Sleep", in February via earMUSIC.