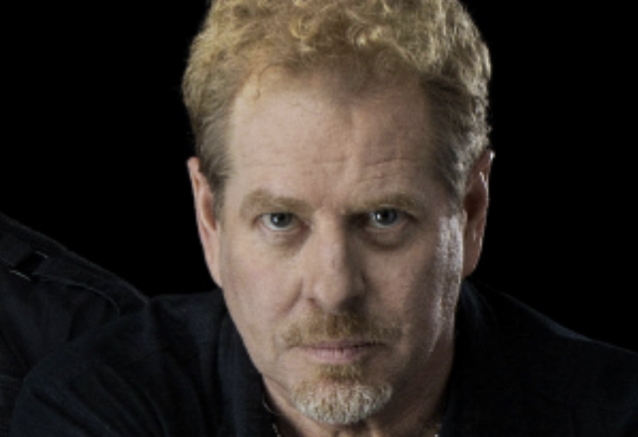 NIGHT RANGER guitarist Brad Gillis recently spoke to "Side Jams"host Bryan Reesman about his passion for collecting guitars and his love for motorcycle riding. The 35-minute conversation, which can be heard below, covered how he got into collecting, what he looks for, how he acquired his signature '62 Stratocaster and developed his unique style, and how he feared that his guitar collection was lost in one of the California wildfires in 2019. Gillis also talked about his love for riding his Harley, cutting a deal for it while touring with Rick Springfield, and how an accident early in NIGHT RANGER's career took him off the blacktop for many years.

Brad: "I've been into this for a long time. I knew I was pretty deep into guitars when I started out back in the '80s, using different guitars and amps to records with and such. I just got into it. I've got a bunch of good friends now that seriously collect, and these guys are purveyors of '50s Strats and the big money guitars. So I started seeking and trying to find these old '50 Strats and old vintage guitars that have their own sound. I always like things that are all original. I don't care if they're dirtied up because I polish them up real nice. I clean them up, take them apart, make sure they're all original. I take them apart before I even buy them. They [the sellers] know I know what I'm doing. They know I'm a collector. So I pull it apart real nice and document it and take pictures. Once I know it's right, I bring it home and I really clean it up. Then I put on new strings, intonate it, and plug it in. Boom, there you go."

On fearing that his home guitar collection was lost to wildfires:

Brad: "I actually had a room dedicated to guitars. About a year ago, when the other fires were happening, I just flew into San Francisco Airport after doing a show on a Saturday night. So Sunday morning I'm flying in, and I'm driving home, and they said on the radio, 'We have a fire in Lafayette.' It's a really nice, beautiful town. And I tell you, when I heard this fire was close to my house, I was 40 minutes away from home. Your heart's pounding. You think of the worst, all my guitars are at home. Long story short, I was able to get home. The wind was blowing 40 miles an hour. I could see the fire over the hill and could see the helicopter going by dropping the water. Freaking out that if it came over the hill, I'd be screwed. While I was driving, I called my buddy who's a commander of the California Highway Patrol. I said, 'Christopher, there's a fire in my town. Can you call CAL FIRE and find out exactly what's going on?' He calls me back and says, 'Yeah, Brad, it's right over the hill from you. Get home soon and don't do anything stupid. Don't get killed, don't get burned up.' I finally got home thinking they would drive me away from my house. I was lucky to be able to get up to my road and started loading all these guitars up [into my Rover] and this car pulls up. I go, 'Who is this?' It was Commander Christopher who came to help me out. He came and filled his car up. We loaded everything up. The wind's blowing, you can see the fire overhead. He hung out with me till they finally got a handle on the fire. Luckily, it only burned two and a half acres. It burnt down the Lafayette Tennis Club and a couple houses. But that next day on Monday, I went right over to this brand new cement storage place and drug all my guitars down there and put them in there. I only keep a couple at home now. Yeah, man, scariness."

On riding his Harley to relax and getting a good deal on it:

Brad: "I've got a beautiful Fat Boy Harley that I go for rides and that really clears everything out. I've been riding all my life. Started out with a Honda 90. My dad was a pilot. He had brought me over a Honda 90 from Japan. Then I got a Honda 100, then I moved up to a Yamaha 250 TT Thumper. Then I end up getting myself a Suzuki 750. The motor was too big for the bike, and I got a little too crazy on that. I pulled a wheelie once and my hand fell off [the handle]. This is right after releasing NIGHT RANGER's first record. And I crashed on it. Luckily, I didn't hurt myself too bad, but I thought, 'You know what, I ride write anymore.' So I gave it up. [Later on] I thought, 'You know, I'll get a Harley.' So about 10 years ago, I got a 100-year anniversary [model], and then I traded and ended up getting this Fat Boy Lo. Actually, I bought it on the road in North Carolina. I was looking at some custom bike shop down there while we were touring with Rick Springfield and THE ROMANTICS. I saw this bike I loved, and he [the dealer] wanted a certain amount for it. And I said, 'Hey, does your wife like Rick Springfield?' He calls her up, and she's all excited. I could hear her on the phone. So I got him backstage for the show and got him and his wife to meet Rick. The next day I went back to his shop. I go, 'How much now for that bike?' He cut me a great deal because I took care of his wife and got him backstage passes."

NIGHT RANGER recently commenced the songwriting and recording process for its as-yet-untitled new studio album. Due in 2021 via Frontiers Music Srl, the LP will be the follow-up to "Don't Let Up", which was released in March 2017.

With more than 17 million albums sold worldwide, over 3,000 live shows performed, NIGHT RANGER's popularity is fueled by an impressive string of instantly recognizable hit singles and signature album tracks such as "Sister Christian", "Don't Tell Me You Love Me", "When You Close Your Eyes" and the anthemic "(You Can Still) Rock In America".