NIGHTWISH: 'Made In Hong Kong (And In Various Other Places)' CD/DVD Track Listing Revealed

On March 13, Nuclear Blast Records will release "Made In Hong Kong (And In Various Other Places)", the new CD/DVD from Finnish/Swedish symphonic metallers NIGHTWISH. The set will contain a DVD documentary (with a running time of approximately 45 minutes) of NIGHTWISH's world tour in support of the band's latest album, "Dark Passion Play", as well as a CD featuring live recordings from the trek. The documentary footage was reportedly directed by Ville Lipiäinen.

"Made In Hong Kong (And In Various Other Places)" track listing:

Fan-filmed video footage of NIGHTWISH performing in Hong Kong on January 24, 2008 can be viewed below.

NIGHTWISH frontwoman Anette Olzon recently hired a well-known Swedish management company, Hagenburg Management (EUROPE, THE CARDIGANS),to handle her personal affairs. Olzon believes that in the long run, the expertise of a big company like the one she is currently working with will also help King Foo Entertaiment, which manages NIGHTWISH.

"It was a hard decision for me [to hire a personal manager] because I didn't want problems with the band," she told MeNaiset, the most popular women's magazine in Finland. "I said that I have different needs in these areas than the rest of the guys. I, for example, need clothing sponsors which doesn't interest the rest of the band. Now I have a person who will be able to take care of that kind of stuff."

NIGHTWISH issued a digital-only collection of demos and B-sides titled "The Sound of Nightwish Reborn", on September 2, 2008. This release, which clocks in at nearly 70 minutes of music, retains "must-have" status for all NIGHTWISH diehards, since it includes a bevy of exclusive material, such as demo versions of songs from the "Dark Passion Play" sessions that were recorded prior to singer Anette Olzon joining the band and that feature Marco Tapani Hietala handling the vocals, as well as B-sides. 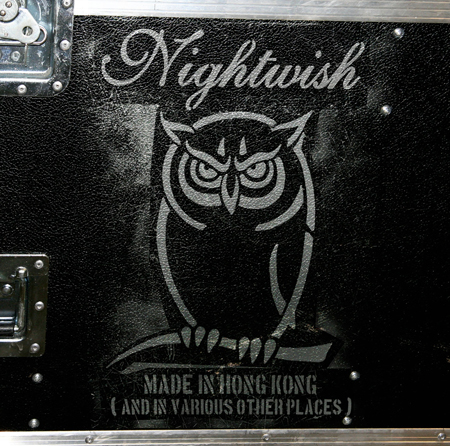