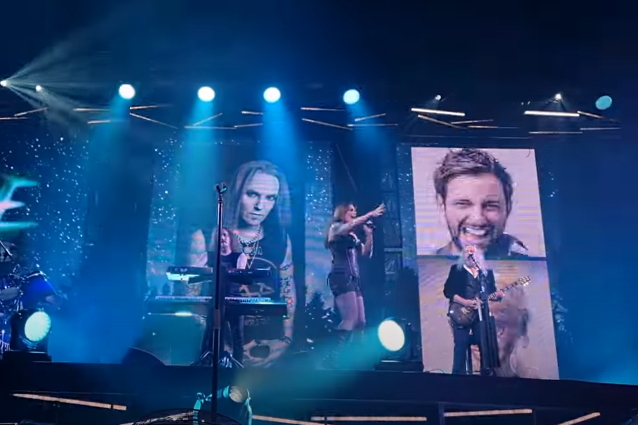 Finnish/British/Dutch symphonic metallers NIGHTWISH paid tribute to late CHILDREN OF BODOM frontman Alexi Laiho during their concert Sunday night (November 14) at Oslo Spektrum in Oslo, Norway. While NIGHTWISH performed the song "The Greatest Show On Earth", a photo of Laiho was displayed on the screen above the stage, a nod to the Finnish metal musician who passed away in December 2020 in his home in Helsinki, Finland. The 41-year-old had suffered from long-term health issues leading up to his death.

A video of NIGHTWISH's Laiho tribute can be seen below.

Earlier this year, NIGHTWISH keyboardist and main songwriter Tuomas Holopainen spoke to U.K.'s Metal Hammer magazine about his friendship with Laiho. He said: "We were really close about 10 of 15 years ago. We hung out a lot. I went to his place; he came to my place in Kitee. We shared a love of music, and also Donald Duck and board games — innocent, child-like things."

Reflecting on how he reacted when he first got the news of Laiho's death, Tuomas said: "We knew he was going through some troubles with his physical health, but when I got the phone call, I remember falling on my knees — like, 'no way.' It punched me big time.

"I really miss him. He was a wonderful personality. There was an innocence in him, a naivety when it came to music that I really respected."

Alexi and drummer Jaska Raatikainen founded CHILDREN OF BODOM in 1993, and the band was one of the most internationally acclaimed metal acts in Finland up until their very last farewell concert in December of 2019. Last year, Alexi put together BODOM AFTER MIDNIGHT, which recorded three songs and shot one music video, all of which were released posthumously.