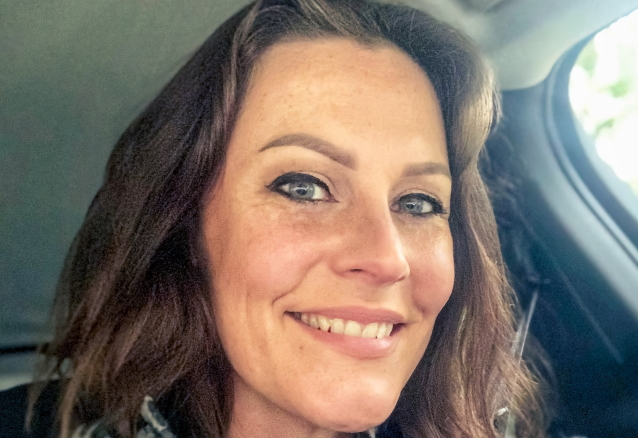 NIGHTWISH Singer Explains Decision To Cut Her Hair, Says She Loves Metal As Much As Ever

NIGHTWISH's Floor Jansen has explained her decision to cut her hair, saying that she wanted "to make it healthy and natural again".

The 41-year-old Dutch-born singer revealed her new look in a social media post on Monday (October 3),sharing a photo that was taken before a performance of her new solo single "Me Without You" on the Dutch TV show "Humberto Op Zondag".

Although most of the responses from her social media followers to her new hairstyle were positive, some fans expressed their concern that she would no longer be able to do her trademark "windmill headbanging" at NIGHTWISH live concerts. Some others were alarmed by the possibility that Floor's foray into a more pop direction with her solo material, coupled with her new appearance, would signal her decision to leave the band that she has fronted for the past 10 years.

Earlier today (Wednesday, October 5),Jansen posted a fresh photo of her new look, and she included the following message: "I love my shorter hair! Even though I'd rather have it long and healthy. But my hair grew thin, became brittle and wasn't healthy anymore. I started using extensions that made it look beautiful again. I am grateful for the possibility of that, but like my natural me the most. So, if that means shorter hair to make it healthy and natural again, so it is.

"I am excited to 'test drive' my shorter hair for some windmilling on stage with NIGHTWISH next week in Brasil!!! It's still called headbanging haha, not hairbanging.

"I know some of you are concerned that I cannot or won't headbang anymore, and that the choice for shorter hair has somehow something to do with my solo career or a move away from metal. Rest assured, it is nothing more than a search for a natural healthy head of hair from a 40+ mom who is as in love with metal and music as ever, but also…. just human".

This past May, Floor spoke to Metal Rules about her decision to launch a solo career nearly 25 years after she joined her first band. She said: "People need to know that NIGHTWISH and my solo career are not biting each other. I know that voices have been risen with concern — considering the fact that now I have a solo career, people are afraid I might leave NIGHTWISH because of it. And I just wanted to stress out that I will not. NIGHTWISH is forever in my heart; I can't imagine leaving it. And solo is there to be on the side of it. And I find it super exciting and very enjoyable, but I'm not gonna leave NIGHTWISH."

When interviewer Marko Syrjala pointed out that other members of NIGHTWISH have also pursued side projects over the years, Floor concurred. "That's it," she said. "So indeed there's AURI; there's BROTHER FIRETRIBE; Tuomas [Holopainen, NIGHTWISH keyboardist and main songwriter] has been releasing music on the side for many years, and everybody is liking doing different things and being musically engaged in different projects. And I think that's very healthy. It should not bite each other. But we do need to agree on the fact that NIGHTWISH is always the big brother; [it is] the priority for us all."

As part of NIGHTWISH, Jansen has landed two Number One albums in Finland, and Top Five albums in Austria, France, Germany, Greece, Hungary, the Netherlands, Norway, Sweden and Switzerland.

Born in the Netherlands, Jansen joined her first band, one of the world's first symphonic metal acts, AFTER FOREVER, when she was only 16 years old. The group went on to release five albums from 2000 to 2007, before they broke up in 2009.

Last year, Holopainen said in an interview that NIGHTWISH would split up if Jansen ever chose to leave.

I love my shorter hair! Even though I'd rather have it long and healthy. But my hair grew thin, became brittle and…

New hair 😘✂️ and dress 👗(by Dolce & Gabbana, styled by Pascalle Koldenhof) 🔥 for my performance of Me Without You at Humberto Op Zondag 😃