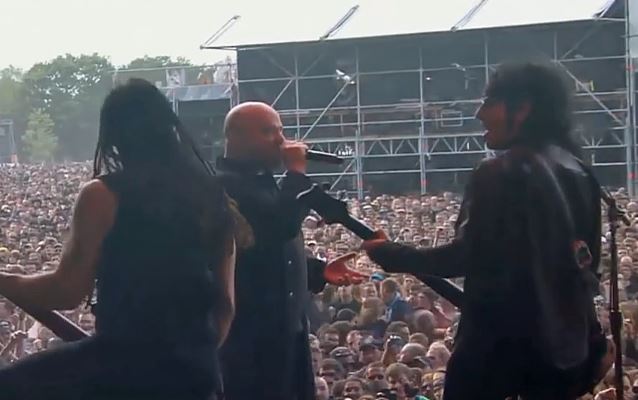 SIXX:A.M. , the band featuring MÖTLEY CRÜE bassist Nikki Sixx alongside guitarist DJ Ashba and vocalist James Michael, joined DISTURBED on stage on Saturday, June 18 at Hellfest in Clisson, France to perform a cover version of the MÖTLEY CRÜE classic "Shout At The Devil". Professionally filmed video footage of their rendition can be seen below.

"Ladies and gentlemen," DISTURBED singer David Draiman told the crowd. "We have a rather special series of treats coming up for you right now. Please welcome … from SIXX:A.M., Nikki Sixx, James and DJ Ashba onto the stage. I think we're gonna play something from Nikki's old band, if that's okay."

Sixx told RiffYou.com last year that he has always seen SIXX:A.M. as "totally separate" from MÖTLEY CRÜE, explaining that he wanted to make a clean break from touring with CRÜE out of the deep respect he had for all he had accomplished with his bandmates, and an unwillingness to trade on that legacy as focused completely on SIXX:A.M.

Sixx echoed those same sentiments in an August 2015 interview with Ottawa Citizen. He said: "For me, it's very cut and dry. When MÖTLEY CRÜE is done, it will be the greatest experience of my life, but it's the closing of that chapter. I will never play MÖTLEY CRÜE music in SIXX:A.M. That is MÖTLEY CRÜE's music. Even if I wrote them, I won't play them, because I don't believe I should do that in another band. We should each do what we already know how to do, which is create great music."

Four months later, while speaking with RockSverige.se, Sixx appeared to backtrack on his earlier comments about never playing CRÜE songs again after the band's "The Final Tour". He explained: "I said, 'I will never play MÖTLEY CRÜE music again,' because I wanted people to hear me. I wanted them to hear that we [SIXX:A.M.] have five hit singles right now, we have a double record coming out, we've got two years of touring. It's really not part of the plan. After seeing my own words in the press, I was, like, who knows? Maybe four or five years down the road, maybe we'll do an acoustic version of 'Live Wire' or do some interesting… But you will never see this band [SIXX:A.M.] lean on MÖTLEY CRÜE, because I don't think that's fair. I wrote the songs, so I guess I'm entitled to play them if I want. I just want some distance."

Just two weeks ago, SIXX:A.M. performed an acoustic version of "Live Wire" during an appearance at a French radio station. Sixx justified the decision to play the song by tweeting: "The band had a great idea to do a haunting version just for French radio. We are not living off of it."