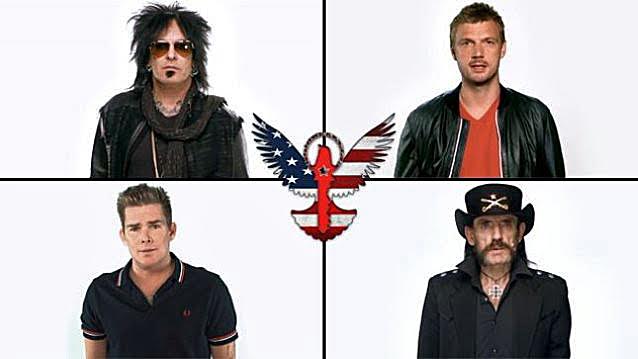 Rockers United's goal is to build awarness and raise funds to support the fight against human trafficking in the U.S. Estrada says: "I have two young daughters that I care about and love very much.

"For the past few years, human trafficking has been on my radar as we see and hear more and more about this spreading sickness. Young girls, like my daughters, fall victim to this travesty every day — and that worries me. It burned my heart. I had to do something. So, I decided to call my rock star friends and see who wanted to join the cause. The response was mind blowing [and] Rockers United was born.

"Human trafficking is the second largest criminal industry in the world today — second to drug activity. This is tragically happening to nearly two million girls worldwide every year. Some of these girls are as young as 7 years old. This is happening all over the world, and it is also happening right here in our own backyards. Los Angeles, San Francisco and San Diego are hotspots here in California.

"The proceeds from our last very successful all-star concert event and rock n' roll auction were used to rescue and rebuild the lives of some of these young victims. Rockers United also extends overseas and donates a portion of its funds to build and set up monitoring stations on the boarders between countries that are known as hotspots for human trafficking."

For more information or to make a donation, go to RockersUnited.org.