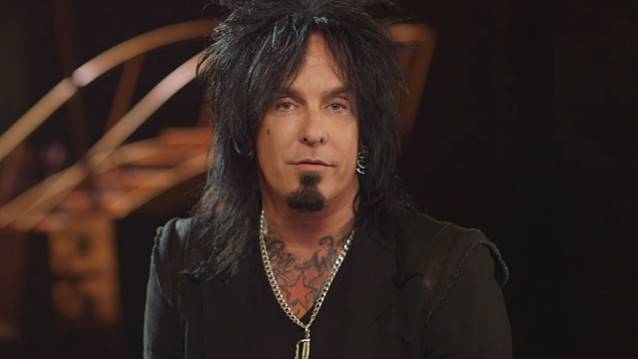 Last night (Friday, November 7) on "Sixx Sense With Nikki Sixx", national radio host and MÖTLEY CRÜE bassist Nikki Sixx and co-host Jenn Marino welcomed Scott Borchetta, president and CEO of Big Machine Label Group. Borchetta spoke candidly about the headline-making decision to pull Taylor Swift's music catalogue from streaming service Spotify, the reasoning behind it, and why it's important for the future of the music industry.

Below is a full transcript of the conversation, which aired yesterday, November 7, 2014. Also available is audio of the discussion.

Sixx: "I figured there's nobody better to talk about what's in the news with Taylor Swift, and pulling all of her music off Spotify. Obviously, you being the label, you would be the right person to go to because you were involved in this decision. So, can you explain it to me?"

Borchetta: "Yes, for all of Taylor's records in the streaming era, if you will, we have never put them on any free streaming services for the first 90 to 120 days. And the reason being is we never wanted to embarrass a fan. What I mean by that is, if this fan went and purchased the record, CD, iTunes, wherever, and then their friends go, 'Why did you pay for it? It's free on Spotify.' We're being completely disrespectful to that superfan who wants to invest, who believes in their favorite artist… MÖTLEY CRÜE is one of my favorites, they've never let me down. I buy their records, right? So why would I want to go and do that only to know that, well, they ripped me off. I could have gotten it for free."

Borchetta: "This is what we decided to do. So, what we had done in the past with her records, is after that initial period, we put them up for streaming services. And for this album coming in to everything that's going on in the business and how dramatic the streaming moment is and how it's affecting sales, we determined that her fan base is so in on her, let's pull everything off of Spotify, and any other service that doesn't offer a premium service. Now if you are a premium subscriber to Beats or Rdio or any of the other services that don't offer just a free-only, then you will find her catalogue. So the problem we have with Spotify is, they don't allow you to do anything with your music. They take it, and they say we're going to put it everywhere we want to put it, and we really don't care about what you want to do. Give us everything that you have and we're going to do what we want with it. And that doesn't work for us."

Sixx: "What do you think is the upside of Spotify?"

Borchetta: "Well, they have a very good player. It's a good service. And they're gonna just have to change their ways on how they do business. If you're going to do an ad-supported free service, why would anybody pay for the premium service? The premium service that you pay for, which they do have a premium service, has to mean something. So, what we're saying is it can't be endless free. Give people a 30-day trial, and then make them convert. Music has never been free. It's always cost something and it's time to make a stand and this is the time to do it."

Marino: "Do you think other artists are going to follow suit? Is that kind of what we're hoping for in this whole thing?"

Borchetta: "Yeah. It's already happening. I've had calls from so many other managers and artists. There's a big fist in the air about this. Spotify is a really good service, they just need to be a better partner and there is a lot of support for this."

Sixx: "Artists are looking for exposure. So however that happens, you know, we do interviews, we do videos, we write songs, we tour, we're looking for exposure to satisfy our fans, and to get them to invest in us, because if they invest in us, we can continue to make music. We've talked about this in the past. Artists need to make money to keep making music, so everybody makes money."

Sixx: "Spotify is one of those things that I hear young artists talking about. 'Man, if we could just get our music on there, like we just want the exposure.' And when you're in Taylor's position, or a lot of other artists' position, you're saying 'you know, I like what you do, I just want to be paid for what I do.'"

Borchetta: "Exactly. And I think that's where you can make a delineation between a free service, which works as a promotional service to create value. So, if you're using a service like Spotify for discovery, it's like okay, here's perhaps the new single that you can stream for 30 days, or here is a brand new artist that we're excited about, that we're going to expose, but when you get into… the big question you're really asking, Nikki, is how do you go from zero to value? And then what happens at value? So that's where you could work with these services. Okay, let's get in there, let's get exposed, let's create value, and once you have value, that means you have a career. And that means you have to sustain that career, because people want to keep hearing your music."

Sixx: "Right. So, as a label, would you look at Taylor. She's all the way up here and you go, look, we have value in her and we want to maximize that value, she wants to maximize that value, and we also want to help change this platform. But as a label, would you look at a brand new artist that you just signed six months ago — you just got their album, you guys really believe in it — you would have a different outlook for Spotify, you might say, let them stream it? Or would you use the same kind of idea."

Borchetta: "I think you have to look at all promotion opportunities to expose something brand new, so that's where you can have a different conversation. And I think you really hit the nail on the head — one size does not fit all. And that's the problem."

Borchetta: "Well, it's no different than a band coming a doing a free radio show, and then coming back around and playing the arena two years later. There has to be a value system in place for us to continue to build careers."