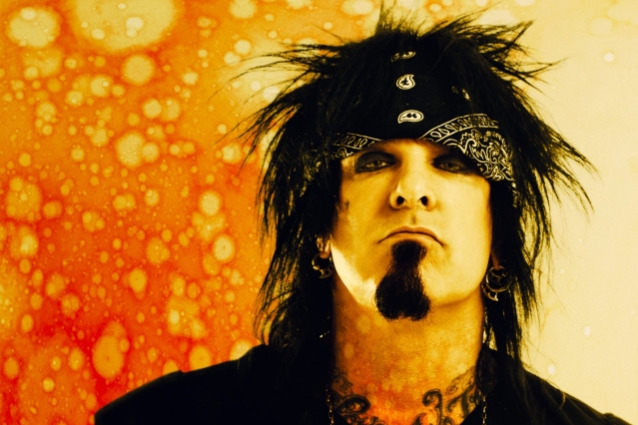 MÖTLEY CRÜE bassist Nikki Sixx has shared a photo of him wearing a mask and gloves, apparently as a precaution against coronavirus.

On Tuesday, Sixx tweeted out the picture and wrote in an accompanying caption: "If your [sic] going out protect yourself and those around you…"

Experts have repeatedly said that wearing masks or gloves isn't a solution, saying that masks are only recommended for people who are sick and for health-care workers.

Earlier this month, U.S. Surgeon General Jerome Adams urged people to stop buying masks, explaining that "They are NOT effective in preventing general public from catching #Coronavirus." He added on Twitter: "But if healthcare providers can't get them to care for sick patients, it puts them and our communities at risk!"

Gloves are similarly not recommended. "This isn't something the general public would be wearing," Dr. Amesh Adalja, a senior scholar at the Johns Hopkins Center for Health Security, told Today.com. "I don't think they're going to do anything but give people a false sense of security, waste time and create more demand for something that's unnecessary, just like masks."

Stephen Gluckman, a professor of infectious diseases at the University of Pennsylvania, concurred, saying: "It's not recommended [for the general public] because it doesn't work. They're wasting money and giving people a false sense that they're doing something."

David Powell, a physician and medical adviser to the International Air Transport Association, told Bloomberg: "First of all, masks. There's very limited evidence of benefit, if any, in a casual situation. Masks are useful for those who are unwell to protect other people from them. But wearing a mask all the time will be ineffective. It will allow viruses to be transmitted around it, through it and worse still, if it becomes moist it will encourage the growth of viruses and bacteria. Gloves are probably even worse, because people put on gloves and then touch everything they would have touched with their hands. So it just becomes another way of transferring micro-organisms. And inside the gloves, your hands get hot and sweaty, which is a really good environment for microbes to grow."

The World Health Organization (WHO) officially declared the spread of the new coronavirus, which began in China in late December, a pandemic on March 11. More than 200,000 cases have been reported worldwide and more than 8,000 deaths so far, putting public health systems and emergency services under immense pressure.

If your going out protect yourself and those around you… pic.twitter.com/HMnxCQvaU3