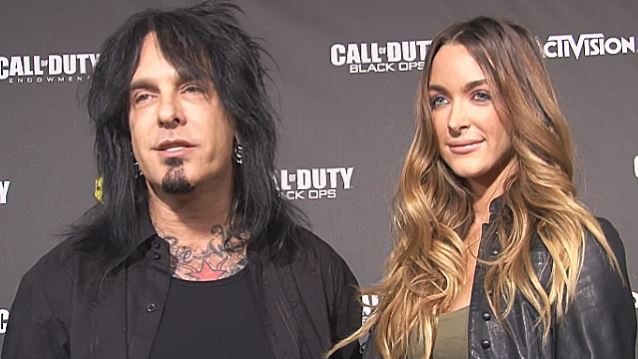 NIKKI SIXX's Wife Is Hoping For A Baby Girl

Courtney Bingham, the 29-year-old wife of MÖTLEY CRÜE bassist Nikki Sixx, has told Britain's Hello! magazine that they are trying to have a baby, which will be the first child for her.

This is the third marriage for Sixx, who has three kids with ex-wife Brandi Brandt: Storm Breanne Sixx, 20, Gunner Nicholas Sixx, 24, and Decker Nilsson Sixx, 19. He also has a daughter with his ex-wife, "Baywatch" star Donna D'Errico, Frankie-Jean Mary Sixx, 14.

"He is such a hands-on dad," Courtney told Hello!. "His three older children — Gunner, Storm and Decker — all grew up living with Nikki full-time. He took them to school every morning, helped them with homework, packed their lunches daily and continues to do that now with my 14-year-old stepdaughter Frankie."

She added: "For someone with such a demanding schedule, it's always amazing to me how he manages to be there for his kids so strongly. He is the best father I have ever seen."

Courtney also revealed that she is hoping for a baby girl. She explained: "Since I'm only going to have one, I feel like I need to have a daughter."

Sixx and Bingham had been dating since 2010, shortly after the breakup of his relationship with tattoo artist Kat Von D.

Here is a sneak peak of @NikkiSixx and my @hellomag#ValentinesDay At Home Piece. Be sure to pick up your copy! pic.twitter.com/T1ip5I6ykB