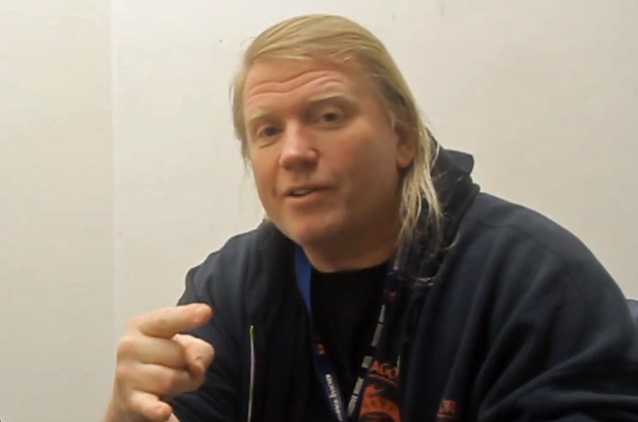 NILE's KARL SANDERS On Departure Of DALLAS TOLER-WADE: 'We Don't Consider It A Loss. We Considered It An Opportunity To Move Forward'

Underground's Voice conducted an interview with guitarist Karl Sanders of South Carolina-based extreme technical death metallers NILE prior to their February 15 concert at Hard Club in Porto, Portugal. You can watch the entire chat below. A few excerpts follow (transcribed by BLABBERMOUTH.NET).

On the 2017 departure of long-time guitarist/vocalist Dallas Toler-Wade:

Karl: "We don't consider it a loss. We considered it an opportunity to move forward. The new guy we got, Brian [Kingsland], is an amazing talent. I'm sure you'll see tonight. He has allowed the band to step forward and move forward."

On whether he imagined NILE embarking on a long career upon their 1993 formation:

Karl: "No, of course not. When we started, we would have been happy to play some local shows and have our music be heard. We never expected to make it this far, but, if the metal gods are kind to you, you have to say yes. You have to accept and that's life."

On whether he considers NILE to be a "big" death metal band:

Karl: "I don't think about those things. I think about NILE, it's music, it's fans, that's what I think about. How big, how small, it's never really mattered to us. Like I said a minute ago, when we started, we never cared about how big the band got. What was important to us was making our music and hopefully sharing it with people."

On whether it has gotten easier for him to write new music for NILE:

Karl: "I wouldn't call NILE 'easy.' It's not easy music. I think as time goes by and the more records that we make, the more of a challenge it is to do what we do, but find new ways to do it."

On when fans can expect NILE's next studio album:

Karl: "Probably by the end of the year. We've got six songs finished so far. It's dark, evil and epic. It's got its own spirit. It's not exactly like any of the ones that came before it. I would say it's closer in spirit to the older albums."

NILE announced that it will be working with producer Erik Rutan (MORBID ANGEL, CANNIBAL CORPSE) on their next studio album, which will be released by Nuclear Blast. The effort will mark NILE's first release with Kingsland.

Sanders previously described Kingsland as "a seriously talented extreme metal guitar shredder" with "a great brutal metal voice [and] a very versatile range." He added that "Brian is also a genuine, down-to-earth, hard-working and motivated guy who has helped reignite and re-establish a sense of team work back into NILE."