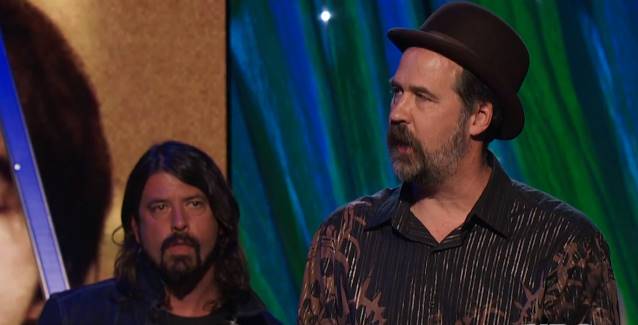 According to The Pulse Of Radio, NIRVANA bassist Krist Novoselic has commented in a new blog post on the events last week surrounding the band's induction into the Rock And Roll Hall Of Fame, which included a three-song performance at the ceremony itself and a secret show later that evening at a bar in Brooklyn. Both performances included artists such as Joan Jett, SONIC YOUTH's Kim Gordon, Lorde and St. Vincent singing in place of late NIRVANA frontman Kurt Cobain.

Novoselic said he was "so happy" about the way the week went, writing, "I feel we conjured the spirit of the band, and we could not have done that alone. This, for me, is a bittersweet notion as we all miss Kurt so much. But considering we were inducted, the show had to go on. Joan Jett was first on my list to be out front. I spoke to Dave about it and he ran with the idea of having all women lead. We felt that would be a good tribute to Kurt and what NIRVANA was about."

The late-night gig at the tiny St. Vitus bar in Brooklyn — which held only around 250 people — featured a full 19-song set by the guest singers and surviving NIRVANA members Novoselic, Dave Grohl and Pat Smear.

NIRVANA was inducted into the Hall Of Fame by Michael Stipe of R.E.M.Novoselic and Grohl were joined onstage by Cobain's widow, Courtney Love, as well as Cobain's mother and sister.

At the induction, Jett joined the band for a performance of "Smells Like Teen Spirit", while Clark performed "Lithium", and Gordon performed "Aneurysm". They were followed by Lorde, who came out to sing "All Apologies".

An edited version of the induction ceremony will be broadcast on HBO on May 31.