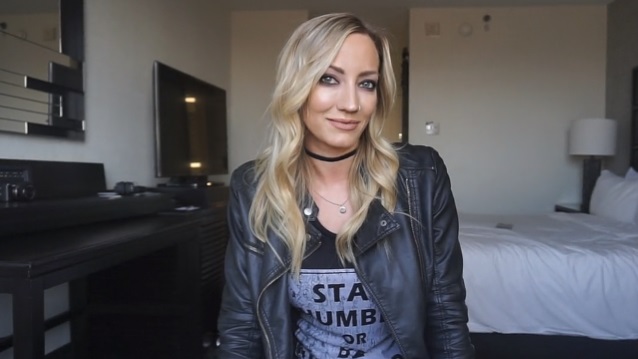 Nita announced the launch of Ibanez JIVA in January via her Facebook page. She wrote: "After years of dreaming, hoping and working, followed by months of planning and preparation, I am honored and proud to introduce my signature guitar, the Ibanez JIVA.

"This beauty will be sold worldwide and comes equipped exactly how I play it live, including brand new signature DiMarzio pickups meticulously designed by yours truly.

"When I had my first meeting with Ibanez in September of 2008, they asked me why they should add me to the artist roster. My (typically emotional) answer was: 'All my heroes are Ibanez players. It's a dream come true for me to just come and meet you guys. If you don't want to give me an endorsement, I'll still play my Ibanez guitars proudly, but it would be a huge honor to join the family and represent the company officially.'

"They took a chance on a basically unknown girl from L.A. (I was actually the only girl on the USA roster at that time) and coming up on my 10th amazing year as an Ibanez artist, words cannot express how honored and thrilled I am to now join the ranks of my greatest heroes as a signature artist."

Nita told Guitar Girl Magazine in a 2017 interview that she started playing guitar when she was 13 years old. "I played drums first, and I was just no good at all," she said. "Then I switched to bass, and I wasn't any good at that either! I'm still not. And, finally, I picked up the guitar and it just stuck. My first guitar was a $99 Squire Stratocaster and I think it came with a little amp and a songbook and some guitar picks and a capo and a slide and a cable and a whole bunch of accoutrements. It was the cheapest little guitar and I played it for years. I didn't have anything nicer for a long time. I was just so passionate about learning and playing and getting better. And then, of course, as soon as I got nicer guitars, I was like, okay, this is a lot easier to play fast. I remember when I picked up my first Ibanez, I was, like, 'Why didn't anybody tell me that I should be playing this the whole time?' As soon as I got my first Ibanez, I just never played anything else — my blood bleeds Ibanez. I have no bargaining power with them; they know that. It's like if you tell a guy you love him right away when you've been dating, which is actually what I did in my relationship too, it just takes away all the power. It's like I love you, then you have no mystery, no build-up, no nothing! There's no suspense. Just like you're stuck now. And I'm happily stuck with both my relationship and my guitar of choice."

Strauss made her name with THE IRON MAIDENS, FEMME FATALE and LA Kiss prior to hooking up with Cooper.

Nita joined the legendary rocker's band in 2014 as the replacement for Orianthi.