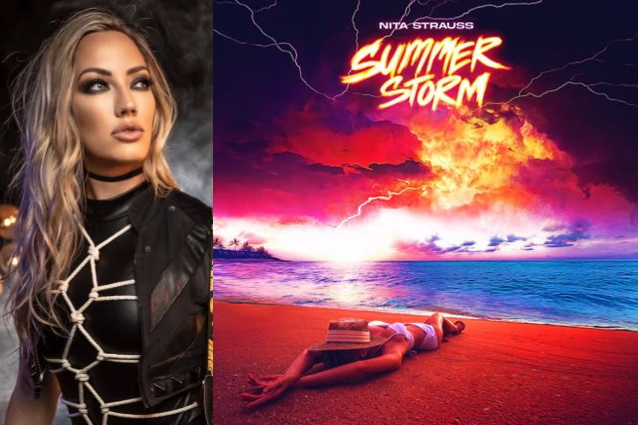 NITA STRAUSS On Her New Solo Single 'Summer Storm': It 'Really Encapsulates Me As A Writer And As A Guitar Player'

Former Alice Cooper and current Demi Lovato guitarist Nita Strauss will release her next single from her upcoming sophomore solo album on Tuesday, August 30. "Summer Storm" is the follow-up to last year's "Dead Inside", which was her first new music since the release of her debut solo LP, 2018's "Controlled Chaos". The track was her first-ever solo collaboration with a vocalist, David Draiman, frontman of Grammy-nominated rock icons DISTURBED.

Speaking to Revolver about her new single, Nita said: "The first single came out way too long ago. That was 'Dead Inside' with David Draiman. And we made a really good splash with that. We got to Number One at rock radio, which was unbelievable — so cool. 'Summer Storm', I felt it was important to release that one next because it's a return to my roots. The album is gonna be half instrumental, half with guest vocalists, so I felt like it was important to have an instrumental song come out next to make sure that the world knows that I'm not completely abandoning my style. I think 'Summer Storm' is one of those songs that really encapsulates me as a writer and as a guitar player. And then, after ['Summer Storm'], I'm sure — actually, a hundred percent sure, 'cause we already shot the music video [laughs] — the next single will be a vocal one. And then after that hopefully the album."

Back in February, Nita told SiriusXM's "Trunk Nation With Eddie Trunk" about her upcoming LP: "It's gonna be half and half — six tracks with vocalists and six tracks of instrumental [music]. We've been doing ['Dead Inside'] live on the solo tour and it's been getting a super-good reaction from our crowds. So I think the next [single] will be instrumental — kind of go back to the roots — and then another radio single after that."

Asked if she could talk about some of the other guests that appear on her new solo album, Nita said: "Not just yet. I will say that we've got a really, really cool blend of some legacy people as well as some new singers that I'm really excited about, and some amazing male vocalists and some incredible female vocalists as well."