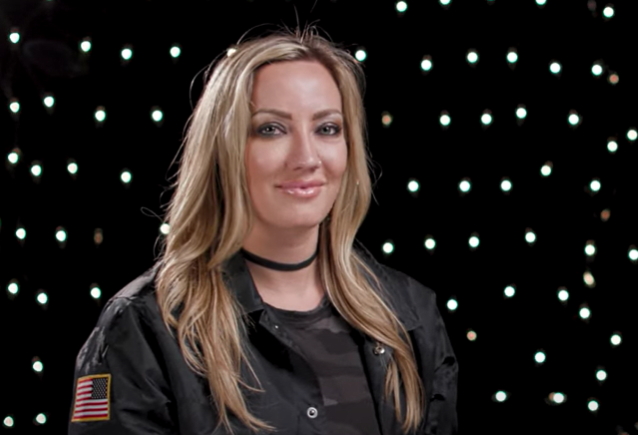 NITA STRAUSS's Advice To Young Guitarists: 'Unapologetically Be Yourself'

In a new interview with Sweetwater, Nita Strauss, the Los Angeles-based guitar shredder for the ALICE COOPER band, was asked what piece of advice she had for young guitarists who are trying to breaking into the industry. She said (as transcribed by BLABBERMOUTH.NET): "I think my best advice, across the board, is always just unapologetically be yourself. I think so many people get caught up in wanting to be their heroes that they forget to develop their own personality and their own style. I think a big part of authenticity is kind of knowing your own boundaries, knowing who you are and what you're willing to do and what you're not willing to do. I did think for a long time that I had to conform to a certain stereotype of, like, 'You wanna be in a band? Go out and drink with everybody.' Or somebody told me you have to show your body. And I went down that path for a while, and I didn't like the kind of attention that I got. So then I went the complete opposite way, and I was, like, 'I wanna be taken seriously as a guitar player,' and that didn't work either, because that's not who I am. There's no rule that says you have to look a certain way in order to play a certain style of music, even though people on the Internet like to say that there are rules. But you can't live by these arbitrary rules that Internet people make up; you just have to authentically be yourself."

Last month, Nita told Wrestling Inc. that her upcoming second solo album, which is tentatively due before the end of the year, will feature "some guest vocalists." She said: "That's something I didn't do previously. I just wanted to sort of make a stand as an instrumental guitar player. And this time around, I kind of wanna show what I can do as a songwriter as well. So there's gonna be a couple of songs that are more traditional hard rock songs that have guest vocalists on it that I'm really excited about."

Pressed about the identities of some of the guest singers on her new LP, Nita said: "I cannot say just yet. But I will say that one that I have confirmed is one of my favorite female singers out there on the scene right now, and I'm very, very excited to finally get to collaborate with her on something."

Strauss also broached the subject of Cooper himself possibly appearing on her new album saying: "That's something that I've been kind of throwing around the idea. Of course everybody asks it. Everybody asked about the last one too, and we didn't do it, so maybe it's time. I don't know."

Strauss's new disc will be the follow-up to her first solo LP, "Controlled Chaos", released in 2018 via Sumerian Records.

Last year, Nita told Heavy New York that her second solo album will still be "an instrumental shred record. I put a lot of different facets of my personality — of which there are many — on 'Controlled Chaos', so you'll see the more aggressive side still, you'll see the lighter side and the happier side, the more peaceful side," she said. "I just finished one of the ballads for this record, and I'm immensely proud of how it came out. So there will definitely be a wide spectrum of different emotions going on. And the biggest change, I guess, would be I am gonna have a guest singer or two on a couple of songs on this one. So that would be the main difference between the two records."