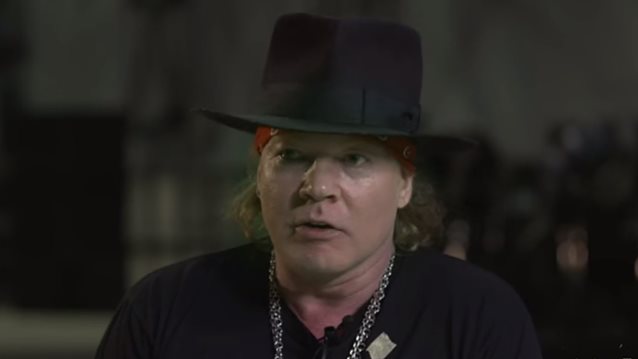 According to The Pulse Of Radio, fans shouldn't approach GUNS N' ROSES and current AC/DC vocalist Axl Rose for an autograph if they see him. While the formerly reclusive singer has been open and friendly with fans during his run of European shows with the latter band, Axl has apparently had enough of people getting his signature on something and then turning around to sell it for big bucks on eBay and other auction sites. He tweeted on May 31: "Can't take da ebayers so un42nutzly I's won'tz b signing things 4 awhile. Much Love 2 the real fans!!"

As previously reported, AC/DC has released a new video interview in which guitarist Angus Young and bassist Cliff Williams discuss the shows they're doing with Axl, pointing out that he's led the group to change up its set list more than usual. Young explained: "With Axl, we've been able to mix up quite a few songs, do a few older ones and put them, which we haven't done in a number of years. We always used to kind of get a setlist, and that would be (it) for a tour. So now we've got a lot more adding and putting in different tracks, and the fun part is when we get there on the stage, and seeing it come to life in front of the audience and seeing the reaction."

Among the rarities the band has broken out on the current European run are "Riff Raff", "Rock 'N' Roll Damnation", "Touch Too Much" and "If You Want Blood (You've Got It)".

AC/DC has three shows left to go on the European leg and has now finalized the ten rescheduled North American dates it will play later this summer — after Axl finishes his stadium trek with GUNS N' ROSES.

Rose made his live debut with AC/DC on May 7 in Lisbon, Portugal, and by all accounts delivered a triumphant vocal performance as fill-in for Johnson even if he was still confined to a chair onstage due to the broken foot he suffered during a GUNS show in early April.

Rose recently indicated that he's willing to continue with AC/DC past the 22 shows he's contracted for.