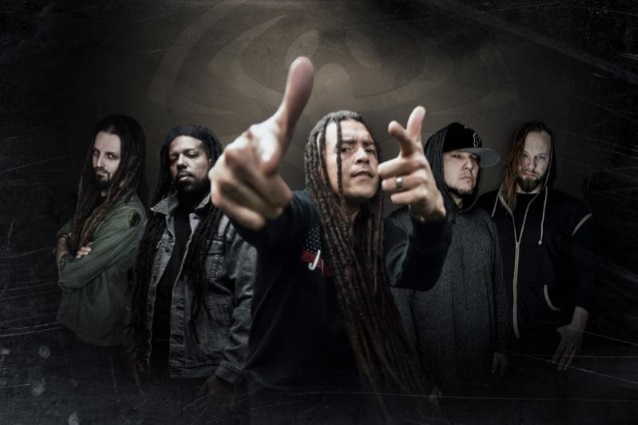 NONPOINT Singer On Forthcoming Album 'X': 'I Haven't Been Prouder Of A Record'

NONPOINT has set "X" as the title of its tenth album, tentatively due in August. The follow-up to 2016's "The Poison Red" was produced by Fred Archambault, who has previously woked with ATREYU and AVENGED SEVENFOLD, among others.

During an appearance on the "SixX Strings" podcast, NONPOINT vocalist Elias Soriano explained why the band took a hiatus after the end of the touring cycle in support of "The Poison Red" before starting work on the new disc.

"We needed a little bit of space to write a record to beat what we had accomplished with 'The Poison Red'," he said (hear audio below). "We made a big hurdle for ourselves, and we wanted this time to give ourselves a little bit of time, give ourselves more perspective, get the right person involved, and even there, luck threw a monkey wrench and changed up stuff for us. But you know what? Call it fate, call it whatever you want to call it — working with Fred Archambault was probably, in all the 10 records... we got to work with Johnny K, we've done records on our own, had some of the best mixers around — Tom Lord-Alge, Bob Clearmountain, huge people — take a stab at our records. Sitting down and working with Fred, for the first time in the recording process, I felt like things weren't being rushed or put to the side or added to a list of stuff that we hope we get to by the end of the recording process. He wanted to entertain the idea not only because it was an idea coming from one of the guys in the band, but he wanted to see what the hell it would sound like, whether or not it was cool. If we even doubted it for a second, he dug in deeper and goes, 'Well, maybe it's not the right tone. Let's try this.' It seemed like we weren't going to have enough time, but we actually finished a day early. It just really felt different this time, and it shows in the final product. I haven't been prouder of a record."

Asked whether NONPOINT was concerned that taking time off would have a detrimental impact on the group's career, Elias said: "That's the wrong reason. If you're grinding, you're grinding. That's one thing, especially with new bands — it's the only way you can really do it. But when you're here — tenth record, almost twenty-year career — you look at things and you go, 'What's more important to us right now? Keeping the train going, or giving them something that they're going to talk about?' For us, that was what we wanted to do, was go, 'Okay, we need a little bit of space to even see if that's the case.' We had never really taken that kind of break before. You want to shake things up a little bit? For us, it was really shaking things down. We needed to get away from it a little bit to go back to it with vigor and perspective that you don't have grinding constantly record to record to record. You're just in that routine. When you give yourself space, you itch. It was more about, like, hitting the reset button and wiping your mind of that constant music cycle that I'm on. I got to take my daughter to school every morning. I got to make breakfast; I got to pack her lunch; I got to pick her up. I got a chance to really step away from it, and it sent me right back in."

Elias said that he believes NONPOINT fans will "be excited" about "X" "because we went heavy. Go big or go home," he said. "Even Fred said when we were on the phone, he's, like, 'I want to make this a kick-in-the-dick record. I want people to feel like they just got clobbered.' I don't want someone to go, [nonchalantly] 'Hey, have you heard the new NONPOINT record?' I want people to go, [excitedly] 'Yo, did you hear the new NONPOINT? Have you heard the new stuff?' I think people are going to be like, 'Wow, I've been waiting for this record from these guys for a long time.'"

NONPOINT is currently on the road in North America with BUTCHER BABIES on the "Kings & Queens" tour.