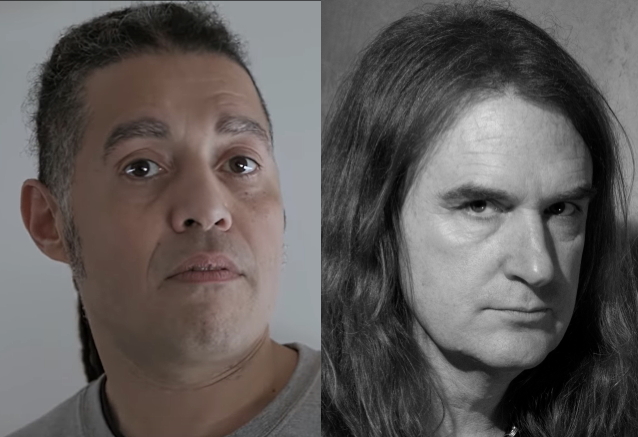 NONPOINT's ELIAS SORIANO Hopes DAVID ELLEFSON 'Sees Himself Out' Of Sex Video Scandal: 'He's One Of The Sweetest Guys'

In a new interview with Rocking With Jam Man, NONPOINT singer Elias Soriano was asked for his opinion on the so-called cancel culture — where public figures are torn down after publicly judged for transgressions, perceived or real. He responded (as transcribed by BLABBERMOUTH.NET): "The Internet wields its power, and it's random how it chooses to do it. It just takes one comment from somebody having a bad day to snowball into somebody getting canceled or some business being closed down or people being called out. It's something that you have to be aware of when it comes to your being on the stratosphere of the Internet. It's a very volatile, very unforgiving place. And people have to tread lightly."

Soriano was then asked to comment specifically on the controversy surrounding MEGADETH bassist David Ellefson's intimate involvement in communications with a woman other than his wife. Over the weekend, sexually tinged messages and explicit video footage involving the 56-year-old Ellefson were leaked on Twitter. The longtime MEGADETH member later released a statement on Instagram denying all social media chatter that he "groomed" an underage fan.

Elias said: "People are gonna put stuff up on the Internet, and people are gonna judge it. You can't expect no reaction. So when something like that happens, you have to expect a reaction. So when that does happen… Again, the Internet is a really unforgiving place. I've been thrown in the midst of it — right in the middle of the pandemic, we were all over headlines — so I don't envy Dave at all. He's one of the sweetest guys in the world. I've met Dave a million times. I've done interviews with him. He's a good person. So I hope he sees himself out of this."

Merriam-Webster broadly defines "cancel culture" as "to withdraw one's support for (someone, such as a celebrity, or something, such as a company) publicly and especially on social media," particularly after they have displayed objectionable opinions or actions.

Ellefson, who has lived in Scottsdale, Arizona since 1994, is also an author and entrepreneur, holding the reins of EMP Label Group, Combat Records, Ellefson Coffee Co., and more, in addition to a diverse portfolio of brands and signature products. Ellefson was also inducted into the 2018 class of the Iowa Rock N' Roll Hall Of Fame, just over the border from Jackson in Spirit Lake, Iowa.