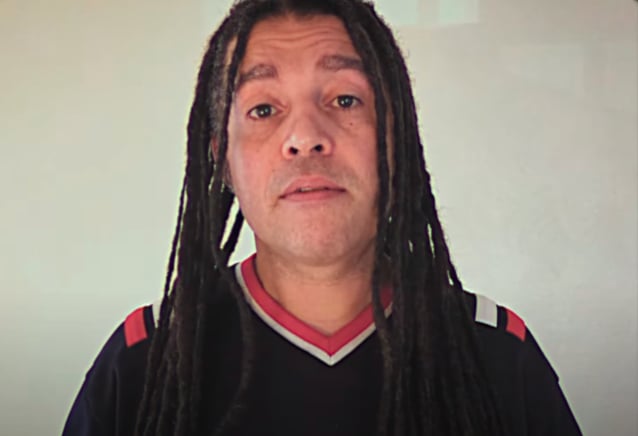 NONPOINT's ELIAS SORIANO: 'I've Had People Call Me The N-Word More Times Than I Can Count On Both Hands'

NONPOINT frontman Elias Soriano recently spoke to the "Aftershocks" podcast about the importance of the "Black Lives Matter" movement, which recently gained momentum in the wake of protests over the heinous killings of George Floyd, Breonna Taylor and other unarmed black people.

"There is an importance to the message and everything that's happening right now in the world," he continued. "I feel like we've said it for decades now, and now it's time for us to maybe sit back a little bit and let those that were quiet about it for some time kind of speak up.

"I've gotta say I'm really honestly very proud of our genre, of artists like Robb Flynn [MACHINE HEAD] that speak out constantly — the gamut of artists that are coming together to really help spread the message about keeping the equality and the happiness around each other going. So I'm excited about the times, and I'm glad to see some of our message really coming to be."

Soriano acknowledged that some of the most talented artists of color have failed to live up to their commercial potential because of the ingrained racism that has existed in American society for generations.

"If you go as far back as LIVING COLOUR, it's obvious," he said. "Did we ever let it slow us? No. Of course not. At least internally. You play the hand you're dealt, and I'm pretty damn good at bluffing.

"We've survived as long as we have, and I rest it on our fanbase and our music, and, again, our message. And I feel like that's enough."

This past June, NONPOINT released an impassioned music video for the new version of its song "Frontlines", re-titled "Remember Me (A Frontlines Tribute)".

NONPOINT is currently in the studio and will release new music this fall.

Although NONPOINT has never made a big commercial breakthrough, the band had a pair of Top 25 mainstream rock hits, including "The Truth" and "Bullet With A Name".

NONPOINT spent most of 2019 touring in support of its tenth album, "X", which was released in August 2018. The follow-up to 2016's "The Poison Red" was produced by Fred Archambault, who has previously worked with ATREYU and AVENGED SEVENFOLD, among others.