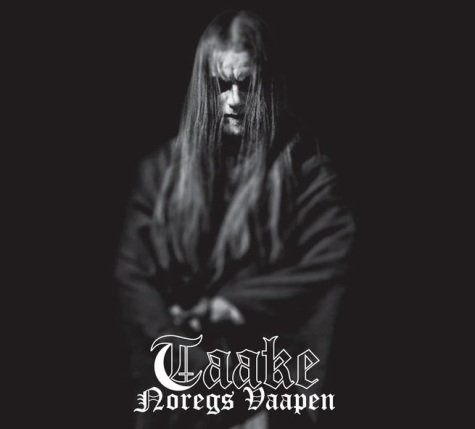 According to the Arab television network Al Arabiya, Norwegian black metallers TAAKE have sparked outrage after being nominated for a prestigious Norwegian music award despite having written lyrics that are allegedly anti-Islamic.

TAAKE's "Noregs Vaapen" album, along with the latest releases from INSENSE, SHINING, VREID and ÅRABROT, has been nominated in the "Metal" category at the 40th annual Spellemann awards (the Norwegian equivalent to the Grammy Awards). The largest and oldest Norwegian music awards show will be held Saturday, January 14 at Folketeateret in Oslo, Norway and will be broadcast live on the Norwegian channel NRK1.

TAAKE's critics argue that the lyrics in the band's song "Orkan" (Hurricane) are xenophobic as they include the phrase "To hell with Muhammad and the Mohammedans" and their "unforgivable customs."

However, Hoest, TAAKE's front man, has refuted these claims and said that their sole intention was to criticize religion. "Our view, in the name of freedom of expression, is that it is shameful to adhere to Christianity or Islam," he said.

Marte Thorsby, chairman of the prize committee's board, denied any allegations that the judges had not properly listened to the album before its nomination. "We enjoy full freedom of expression in Norway and a Spellemann jury is not going to censor content in any way," she told the Aftenposten newspaper.

Hoest previously found himself at the center of controversy in March 2007 after he appeared on stage in Essen, Germany with a swastika symbol drawn on his chest. This led to the cancellation of the band’s European tour and outrage among many heavy metal fans across Germany.

Hoest responded to the controversy by saying, "We truly apologize to all of our collaborators who might get [into] problems because of the Essen swastika scandal, except for the Untermensch (subhuman) owner of that club; you can go suck a Muslim."

TAAKE's most recent statement takes a slightly less offensive tone: "TAAKE has never been a political band, and we do not encourage either violence or racism."